A guideline that would allow for designing wood buildings in Ontario taller than six storeys high is raising some support and some concerns.

In Ontario, “if you can demonstrate that a build­ing constructed from some material — other than steel or concrete — meets the same minimum safe­ty requirements as the Building Code, you can use that alternate material, such as mass timber,” says Michael de Lint, director of building regulatory reform and technical standards at the Residential Construction Council of Ontario (RESCON). 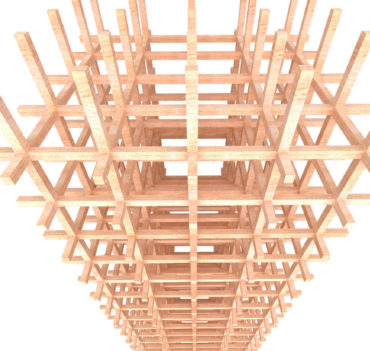 But before building a mass timber structure exceeding six storeys, a constructor would have to “go through an alternative solutions route,” meaning it would need to apply to the municipality, de Lint points out. It would then be at the municipality’s discretion to decide whether or not to approve the project.

“We have worked with the (Ontario) Ministry of Natural Resources and Forestry to develop a guideline or a resource document to assist designers and municipalities to approve those tall wood buildings over six storeys,” de Lint reports.

It will include “information on how to build taller buildings with mass timber products and all the fire-structural issues that you need to take into account for that kind of construction,” he says, adding it is expected to be issued this summer.

Ontario is not the only province where the wood building issue is receiving attention.

British Columbia was the first province out of the gate to change its building code to permit for construction of wood-frame buildings taller than four storeys. And in Quebec, a new 13-storey condo tower in Quebec City uses cross-laminated timber (CLT) as its primary building material.

Some experts note that CLT has been tested by the National Research Council (NRC) for fire resistance, while building codes in both British Columbia and Ontario require mid-rise wood frame buildings to be more earthquake-resilient than those built from other materials. Conversely, some suggest some tall wood buildings may be particularly susceptible to water damage.

The National Building Code 2015 edition permits buildings classified as Group C and D (residential and office-type building, respectively) to be built up to six storeys using combustible materials, notes an NRC spokesperson. “The technical committees are currently developing proposals that would permit combustible construction up to 12 storeys for the 2020 code,” the spokesperson says. “This is currently under development and public consultation has not yet occurred.”

There are already some timber structures in Canada over six storeys, including the 14-storey Brock Commons student residence in Vancouver, and the Quebec City condo, Project Origine, which includes a 12-storey wood structure on top of a one-storey concrete podium.

While Quebec’s building code does not permit wood buildings higher than six storeys, de Lint notes, it has “developed an alternatives solution.”

With the ability to propose “alternative solutions” to provincial building codes, “there seems to be a back channel to which they are getting in with these kinds of projects,” argues Tareq Ali, director of marketing and communications for the Canadian Institute of Steel Construction (CISC). The CISC’s take is there “is not enough evidence-based support to do this kind of accelerated tall wood construction,” Ali says.

The “concrete podium would serve as a rigid ‘backbone,’ which would provide some measure of torsional rigidity,” says Mark Millner, vice president of engineering at Pario Engineering and Environmental Sciences. “Also, the interface between the structure and soil would be best handled by the use of concrete, as in most conventional buildings.”

CLT “has a built-in fire-resistant property just based on how the composite is actually created with the multiple layers of the mass timber CLT,” says De Berardis. “So that’s one of the built-in attributes of CLT that kind of lends itself to allowing these structures to go higher and still maintain certain fire resistance ratings,” he suggests.

CLT falls into a separate classification from “light wood frame” lumber, says De Berardis. CLT, glued laminated timber or a combination of those products can be used for taller buildings.

Still, “particular attention would need to be given to fastening of the members,” advises Millner. “Unlike steel, where welding is often a simple solution to complex connection issues, wood has issues such as direction of the grain, which must be considered when fastening pieces together.”

“Wood is naturally more earthquake-resilient,” de Lint says. “Because B.C. was the first province in Canada to develop requirements for six-storey wood buildings, they were quite sensitive to the earthquake issue, so they required the wood buildings to resist a 20% higher load than an equivalent steel or concrete building,” he says. This requirement, he reports, was “carried over” to Ontario.

“Earthquake, snow, rain and any other atmospheric, or climatic, loads are the same for any structure,” states Millner. “In short, it would be incumbent on the design engineer to ensure the design is sufficient to account for any and all loads (and various combinations),” he explains. “So, these risks would not increase simply because of the material used to construct the structure.”

For some, use of wood in tall buildings raises concerns about water damage risk. “Water damage reacts differently in wood-frame buildings than for concrete structures,” notes Study of Insurance Costs for Mid-Rise Wood Frame and Concrete Residential Buildings, a report prepared by Globe Advisers for the Concrete Council of Canada. “Oftentimes in wood-frame structures, water-related problems are not apparent for some time,” it notes.

Northbridge Insurance is “aware of the mould issues in cross-laminated timber high-rises that are being raised by some building envelope experts,” Ho says. The insurer’s property policies “exclude mould unless it is caused by or results from an insured peril.”

Wood-framing members tend to shrink after drying following installation, Ali says, reporting “in mid-rise structures, the effects of cumulative shrinkage can damage the building envelope, such as the exterior cladding, windows and hold-down system,” as well as plumbing, heating, ventilation and air conditioning installations.

“The building codes all require moisture to be controlled; however, in a timber structure, there may be requirements for treating any wood exposed to moisture, beyond what is currently required,” says Millner.

Many RESCON members “are actively constructing multi-unit buildings in the four- to six-storey range,” De Berardis says. “One estimate is there are about 80 projects at some stage of development.