Water damage prevention is simply too large of an issue for property and casualty insurers to address through individual product initiatives leading Canadian home, car and business insurers to call for a new collaborative approach to reduce Canadians’ exposure to overland flood claims.

It’s called a “whole-of-society” approach, according to the Insurance Bureau of Canada (IBC). “It’s up to governments, individuals, insurers, the whole gamut [of society] to collaborate – because climate risk is very complex, and we each have a role to play,” explains Craig Stewart, IBC’s vice president of federal affairs.

The industry’s response to overland flood

Canada’s P&C insurance industry is relatively new to the business of covering overland flood damage. Historically, the industry concentrated on reducing risk associated with fire, not water. But the modern-day effects of climate change have brought the issue of flood damage into high relief. 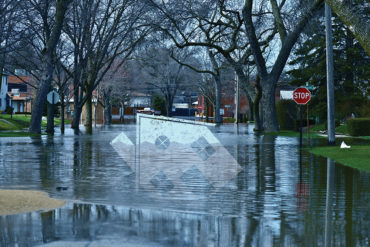 “Over 85% of insured losses since 2000 have been due to water,” Stewart says. “Although as an industry we handle wildfire and wind events quite well, we still haven’t figured out how to handle overland flood. And a big part of that is the unpredictability of the peril.”

Water damage is in the foreground once again this year, given a spate of bad weather in Ontario and Quebec. Ontario bore the brunt of two back-to-back water-related weather catastrophes in April and May, leading to a collective industry loss of roughly $600 million in the first half of 2018. “In terms of the number of catastrophes that involve flooding in Ontario, the year of 2018 has seen a significant amount, and is currently tied with 2017 for the most within the CatIQ database, back to 2008,” says Laura Twidle, director of catastrophic loss analysis at Catastrophe Indices and Quantification Inc. (CatIQ).

That attitude changed after the notorious Calgary and Toronto floods of 2013. In addition to causing almost $3 billion in insured damage (including loss adjustment expenses), those devastating floods resulted in “some not-so-positive media stories for some insurers who didn’t necessarily pay all the claims because they weren’t a part of [existing property] coverage,” recalls Steve Cohen, Chief Underwriting Officer at RSA.

That potent combination—massive claims payouts and an overall reputational setback—led to a 180-degree shift in how the insurance industry protects Canadians from the peril of overland water. But the industry’s early response to overland flood risk appeared to be more piecemeal than cohesive: individual insurers were simply competing with one another to offer consumers different types of flood coverage packages.

As insurers began to develop flood policies, they took a misstep, says Jason Thistlethwaite, an assistant professor at the University of Waterloo’s School of Environment, Enterprise and Development. “The industry raced off in response to some of these reputational concerns to develop this overland flood insurance product. And they’ve done so without the right conditions in place to support sustainability. We have flood insurance in Canada, but not for those who need it most.”

Thistlethwaite believes flood policies are currently too expensive for some Canadians and denounces policies for excluding coverage for homeowners who live in high-risk geographies like urban areas or floodplains. This isn’t the fault of the insurance industry, though, he continues. “That’s insurers doing prudent and sound risk management. Insurers aren’t a charity, they’re doing what’s right by their business.”

Gibson agrees the insurance industry alone can’t improve the affordability and accessibility of flood policies, because after all, insurers are businesses. “It’s going to have to be an industry solution,” he says. “I want to provide a competitive product to consumers, but I also want to provide a service to all Canadians.”

What the insurance industry can do

One thing the industry can do is improve the way it predicts flood damage. Current climate change risk models are faulty, Thistlethwaite says, especially those that still rely on historical data that doesn’t account for the increasing frequency of weather events.

Insurance companies typically assess product pricing based on historical claims patterns; to date, there hasn’t been a lot of data collected regarding overland flood claims. “Over time, when [insurers] see the risk increase, they’ll be able to segment the market and raise rates,” Thistlethwaite says. “That assumption is based on a lot of confidence in what is a very uncertain area of risk management – managing the influence of something like climate change on the local environment.”

Some insurers have access to data enabling more modern, predictive models, helping them to improve the pricing of weather-related policies. By reducing the exposure that insurers accept when they cover the peril, the models allow companies to offer coverage for overland flood while still finding some measure of profitability.

But, as overland water events become commonplace, it’s becoming clear that predictive risk models aren’t enough to mitigate the immense risk that flood poses to both Canadians and the insurance industry. And if insurers’ data alone isn’t enough to increase Canadians’ access to overland water protection, something must change in how we plan for, think about, and insure the risk of flood, says Thistlethwaite. Otherwise, “flood insurance will be a product available for the rich individual property owners, and also available for communities that have a lot of socioeconomic advantages, because they’ll be the ones that could put tax dollars towards measures within their communities that reduce risk.”

However, the future may not be so bleak. Insurers are currently competing to be leaders in managing risk in the era of climate change. They’re looking at predictive models, incorporating climate change into their underwriting, and assessing how infrastructure changes can help, proving that underwriting flood risk remains a good opportunity for the industry.

“Because of what we believe is a change in extreme weather, flood could occur anywhere,” says Gibson. Now, two years after its introduction, “over 50 per cent of our homeowners purchase our overland water endorsement.”
Educating consumers about flood risk is the next great challenge for the industry. “Canadians aren’t connecting the dots between the severe weather they’re seeing, and how these trends are costing them. And insurers, through their communication channels, can help address that gap,” says Stewart.

Brokers are an instrumental part of the education process, since they’re uniquely positioned to mediate a dialogue between insurers and policyholders. “They can provide information [about] what to do in an emergency, how to file a claim should the worst happen, and educate the customer about the coverages on their policy,” says Karen Mican, senior vice president of claims at RSA.

The best way to bring up flood coverage with existing customers is during an annual or bi-annual review, suggests Cohen, or even if the customer complains about a premium hike. “That’s a window of opportunity to say, ‘Do you understand what your risks are, and do you understand what it costs to cover those risks? Let’s just make sure you’re getting the best coverage for your money.’ And I think that that is a wonderful opportunity where a broker can never be replaced.”

Or, if brokers want to educate new clients, simply include flood risk management in the regular conversation about exposures. “Flood is just part of that conversation,” says Cohen. “It’s business as usual in talking about fire, tax, water and flood.”

In addition to offering coverage and educating Canadians about flood risk, insurers can offer price incentives to motivate Canadians to reduce their flood risk.

“Insurers want to be incenting mitigation as much is possible to de-risk communities and individuals, which in turn lessens our own risk,” explains Stewart. Thistlethwaite agrees, and emphasizes incentives like discount should be substantial—not equivalent to a rounding error.

“The latest I’ve heard in terms of a range of discounts that could be offered to consumers is between 5% and 15%, which I’m almost positive is within the error of what they think an action could lead to in reduction of risk.”

What governments can do
In a whole-of-society approach, Canadian governments have a big role to play in changing the way we think about climate risk. “Canada, for the most part, has relied on a 1950s approach to managing risk,” Thistlethwaite says. “That’s build things [blocking the peril], then put people on the protected side. What that’s done, actually, is increase risk, because people have been allowed to build in areas they shouldn’t have been allowed to.”
To reduce Canadian homeowners’ exposure to flooding, governments could “play a role in regulation in terms of building codes, whether that’s allowing new building or rebuilding to occur,” Gibson says. “Let’s not built in floodplains. Let’s build where it can withstand water.”

In addition, there should be a more transparent exchange of data between insurers and the federal government. “It’s up to the big government—the one with most tax dollars—to take positions of leadership and convene organizations together and say we’re going to provide [risk mitigation] information to people,” Thistlethwaite says.

He references the United Kingdom as a place where collaboration between the government and insurers has helped educate people about the flood risk, allowing homeowners to take actions to protect themselves. “You can type in your postal code and understand whether you need to buy insurance. It talks about how much a flood is likely to cost. Something like this, if it can be done in other countries, can surely be done in a place like Canada that has all these resources.”

The federal government started participating in conversations regarding flood risk in November 2017, when it held its National Roundtable on Flood Risk. Since then, “conversations are ongoing between insurers and municipalities about encouraging pricing at the community level,” says Stewart. “Further conversations are occurring around the value of natural infrastructure and incenting the protection of the natural features that protect us.”
As for next steps, IBC is giving a presentation to all federal, provincial, and territorial ministers of emergency management on a collaborative approach to flood risk in January 2019.

Though Stewart may be optimistic, the challenge is clear. “I’m afraid when you talk about getting the majority of insurers to agree on something, and the government, that is a tall order,” Gibson observes. “In the meantime, it’s up to Canadians to look out for themselves. In the long term, I think we’ll figure it out. But I think in the short term, I don’t have the magic wand to get an industry solution together.”