But a devastating fire on a cold December day would present a worst-case scenario for project consultants, as well as some lessons for insurance company underwriters who assess the risk of covering half-built construction projects.

Before this redevelopment project, 655 Princess Street was a vacant property. The property was to be redeveloped as a 140-unit student apartment complex. However, for property use to be changed from commercial to residential zoning, the site required the filing of a Record of Site Condition (RSC), a legal requirement in Ontario under the Environmental Protection Act. 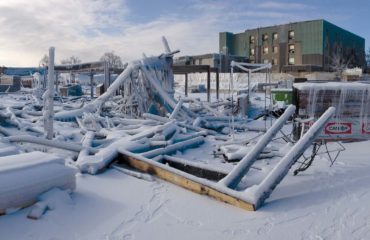 XCG Consulting Limited was hired to complete the Phase 1 and Phase 2 Environmental Site Assessments (ESAs). The ESAs were conducted in August 2012 and the remediation began in April 2013. Widespread soil contamination was found on the site; one area had groundwater contamination. During the remediation phase, about 11,000 tonnes of contaminated soil was excavated and hauled off-site.

Following the soil remediation, an RSC was filed for the portion of the site that did not have groundwater contamination. Above-grade construction of the large wood-frame apartment building began shortly afterwards on this first RSC parcel of land.

On the remaining parcel, where groundwater contamination had been found, six months of follow-up groundwater testing was completed after the soil remediation. A second RSC was then filed, completing the RSC process for the entire site. Above-grade construction could then start on the second RSC parcel.

In October 2013, XCG’s role as the environmental consultant was officially complete. But then came the unexpected.

On Dec. 17, 2013, with much of the wood framing of the 4.5-storey building complete, a small fire broke out on an upper floor. The unfinished building had neither fireproofing materials nor a sprinkler system installed yet, so the fire quickly spread. The wood structure was destroyed within two hours, despite the valiant efforts of the Kingston Fire Department.

According to eye-witnesses, the flames were four storeys high. Several surrounding buildings were also damaged; some had to be demolished.

From remediation to rehab

Following the fire, XCG became involved in the environmental rehabilitation of the site. Approximately 5,000 cubic metres of fire water mixed with ash, charred residue, and fire-retardant foam had accumulated in the basement parking garage and the sump pits at the site.

The rehab aspect of the project was conducted during the winter months. By the time the site was safe to access following the fire, a thick layer of ice had formed on the surface of the accumulated fire water, prolonging the environmental rehabilitation of the site. It took approximately nine weeks to complete the rehabilitation work, and a few months after that before construction of the building resumed.

The apartment building is now home to hundreds of tenants, many of whom are students attending Queen’s University. Maybe some of them are students in engineering and environmental science who will appreciate all that went in to building their residence.

The cost of the 655 Princess Street project was $1.3 million for the remediation, plus an additional cost for the cleanup and environmental rehabilitation component. Much of this was paid directly by the client’s insurance company.

It’s important to consider the building stock details such as size, construction materials (including fireproofing materials), external exposure, and fire protection systems such as sprinklers.

Ensure water system access for fire protection. Pay particular attention to the municipality’s ability to control major fires in light of the risks associated with a construction site.

Assess measures established during construction to maintain surveillance in areas where there is a greater risk of fire — including parts of the structure where combustible materials are present, and where ignition sources such as portable heaters or propane torches are in active use.

Kevin Shipley is a partner of XCG Consulting Limited and is based in the Kingston, Ontario office.