It was all fun and games at the Raptors’ victory parade until people got hurt — and worse.

A planned two-and-a-half-hour parade route in June was supposed to take the Toronto Raptors, Canada’s celebrity 2019 National Basketball Association champions, to Toronto City Hall for a victory celebration. Unfortunately the plan went awry, turning into a six-hour adventure when massive crowds jammed the parade route through the downtown streets of Toronto.
As the parade bogged down in a sea of people, a nightmare scenario played out: emergency calls were placed for a baby in medical distress. The baby died two days later.

Crowd risk
Did overcrowding on city streets play a factor in the baby’s death?

Yes, the leader of the Toronto Police Association told CBC News. Responders “were frustrated” by the crowds in their attempt to reach the child. It is estimated that more than 2 million people packed downtown Toronto to attend the celebration. 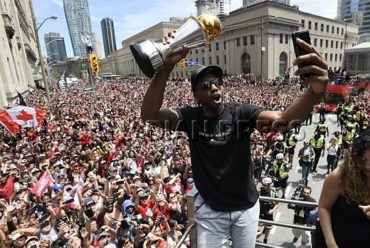 A statement from the City of Toronto, Raptors owner Maple Leaf Sports and Entertainment and police said the baby was rushed to hospital within six minutes of responders arriving, contradicting reports that claimed neither medics nor police could reach the child.
Could the city, police or MLSE be at risk of exposures because of the incident? Certainly, says Tyson Peel, Toronto-based national property and casualty director at Burns & Wilcox Canada.

“The city could be named in a suit just due to the fact that the emergency support team wasn’t able to get to the baby quickly enough, or get that baby quickly enough to the hospital, in order to help save them at the end of the day,” Peel says. “If time was a factor and the baby needed emergency services, and it took 45 minutes when it normally takes three, there’s definitely an issue there.”

The same questions could be raised regarding any other type of medical emergency that happened at the parade, says Weston Pollard, lawyer and partner at Edwards Pollard in Oakville, Ont. Pollard focuses on personal injury law and insurance defence.

If someone had a heart attack or fainted from dehydration and emergency responders couldn’t get there fast enough, there is significant exposure, Pollard says. “What if the injuries are so much more significant because [paramedics] couldn’t get in to deal with them in a routine fashion? I think then you can look to the organizers for that, because I think there should have been more personnel and there should have been better crowd control. Those two things were within the control of the city organizers. If there is a case like that, I do see some exposure.”

Gary Hirst, president and CEO at CHES Special Risk in Toronto, agrees. “The largest risk is liability and responsibility,” he says. “The police are there as guardians of the public, but I don’t think they’re to be blamed at all. It’s just the overall planning of the event could manifest itself in some sort of liability claim.”

The bigger the crowd, the higher the odds of something going wrong, Peel says. That makes the ability to communicate critical. During the Raptors parade, cellular service was not always available because systems were overwhelmed by the number of people downtown. Organizers of any event need to ensure there’s always a fallback communication method in case the mobile network fails, Peel says. They need to “make sure they can protect everybody and get whoever they need to their right place if there’s an emergency that happens.”

Pollard and Peel believe much of the chaos at the Raptors’ parade came down to poor planning. It could be argued, for example, that:

• there weren’t enough barricades along the route

• not enough police were managing the crowds

• no one was ensuring that the parade moved along in a timely fashion.

“Have they planned for the worst?” was an important question on Peel’s mind. If there was a bomb threat and people needed to be evacuated, did the organizers know how to do so effectively? Were enough staff members available to handle such a procedure?

“In an emergency situation, that’s when you’re going to have a lot more injuries,” Peel says. “In a crowd, people start to panic and you get the pressure of everyone building up trying to run away. A lot of the injuries relate to that sort of scenario.”

A shooting at the parade reportedly led to a mad scramble a few blocks away from where players, city and team officials were giving an outdoor presentation. Whether anyone was injured in the race to flee the shooting area is unknown.

Slip-and-falls are also a risk hazard at any crowd event. What if someone tripped on the sidewalk and suffered an injury during the parade? The injured party would need to show that overcrowding and a lack of control by the city was the cause.

“Certainly there will be some circumstances where you could point to crowd swelling, etc.,” Pollard says. “But I think that would be on the person who was injured to prove that the crowd in that areas was so out of control, that it somehow led to them tripping over this hazard.”

Overcrowding at events can also affect businesses. A parade crowd swelling in front of a business, for example, could lead to a broken window or signage. An insurance claim would follow but the insurer may then look to the city to recoup those costs if they can show overcrowding was a factor.

Hirst says he didn’t see any portable toilets or shaded areas for people who were waiting for the team to arrive at Nathan Phillips Square; for him, this raises additional concerns around health and safety.

At outdoor events, people may find their way into private businesses in the area looking for relief from the sun. Pollard recalls the outdoor Mass with Pope John Paul II in Toronto’s Downsview Park in 2002. He says the lack of washroom facilities at the time sent people into nearby stores; the sewage system in the area was overwhelmed when people “flushed everything,” causing backed-up and burst pipes. “The city ended up having significant exposure to repair,” Pollard says of the Pope’s outdoor Mass in 2002.

Commenting more generally about commercial risks related to crowds, Pollard adds: “If there’s been damage to the business – pipes, broken windows, graffiti – I think people could look to the city and organizers ultimately for those type of things. They’ll go through their own insurance and then I bet you we see some subrogated claims against the city come in from insurers who have paid out on these claims that we can directly trace back to crowd control issues.”

The Raptors parade went along Lakeshore Boulevard and University Avenue, which are wide streets that have at least six lanes of traffic and a sizeable median at different stretches. That amount of space made it possible for a large viewing audience. However, it was clear organizers underestimated how many people would show up, Peel says.

At other types of parades, like Toronto’s Santa Claus Parade – which draws more than half a million people – a safe perimeter is generally kept, says Peel. But that was not the case here. People were able to run alongside buses, creating further risk: what if someone got hit while crossing between buses?

In this type of hypothetical scenario, “I think there could be multiple parties involved,” says Peel. “The bus driver would be one. The company that runs the bus is another. And the city [could be found liable] as well for the planning and not keeping people away from the streets. Each person would probably be assigned a portion of the blame if there was a suit brought against them if an accident did occur”

Pollard wonders if the blame could shift elsewhere. “On the flip side, if I’m defending that, I’m going to say, ‘You know exactly what the risk is when you run beside a bus. That’s why no one runs beside a bus.’”

Hirst doesn’t believe blame would fall to the injured party. “The way the law is put together here in Ontario, if you were running alongside the bus and tripped over and fell under the wheels, it doesn’t really seem to be your fault for tripping over,” he observes. “You really shouldn’t be running alongside a bus, because obviously you’re on a public road and you shouldn’t be walking along that. Common sense would suggest that it’s actually your fault.”

Pollard would like to see things handled differently in the future. “Should we re-think the parade route? Why are we going down streets where we can’t corral people? Why not have it completely on [the Canadian National Exhibition] grounds, where there’s gated access and where we could control the [size] of the crowds that come in?” Pollard said.

Peel feels the same. A shorter parade route would mitigate some of the risks, but barricades would play a big role in helping as well. “If they were more prepared and put up proper barriers straight through the whole parade route … at least it’s a little bit safer so that no one’s going to be hit by a bus or anything like that.”