Over 30 Juno Awards to be represented on stage to perform at Benefit Concert #BackFortMac, Monday June 27

Toronto – Hub International’s Eileen Greene is challenging the insurance industry, companies, vendors, brokers and suppliers to step up to the plate to support the fundraising concert #BackFortMac on Monday June 27, 2016 at Toronto’s Roy Thomson Hall at 7:30 p.m. “Having just returned from Fort Mac and speaking with First Responders, the situation in our Northern Alberta town is devastating and tragic. These Canadians desperately need our help” said Greene. “One First Responder told me that the demands at food banks in the city has increased significantly.” 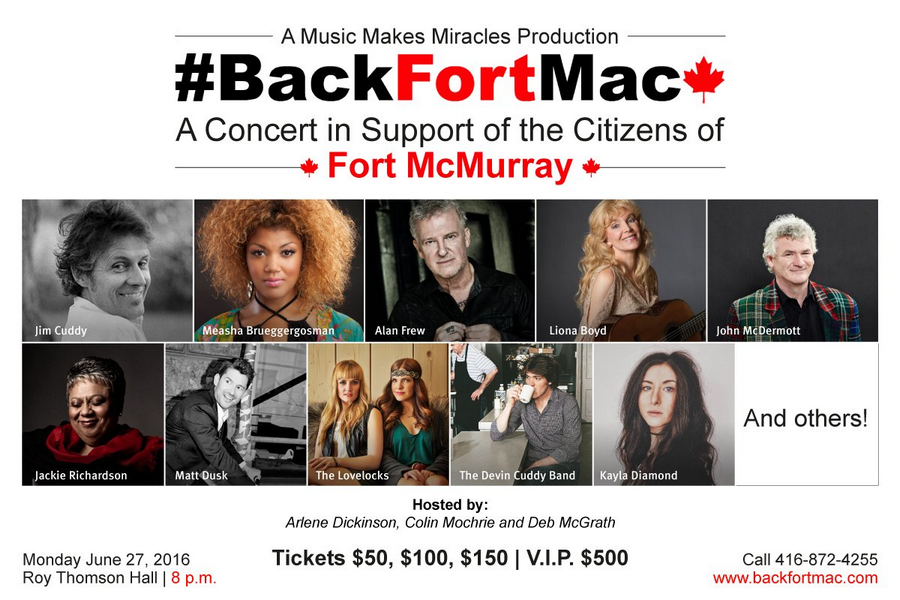 #BackFortMac is being staged to help the thousands of citizens affected by the catastrophic and on-going fires around Fort McMurray, Alberta, and let them know that Canadians stand with them. These generous Canadians are donating their talent and Roy Thompson Hall has waived its rental costs; there are no admin fees for volunteer work.

Ninety per cent of the funds raised by #BackFortMac will be donated to the Canadian Red Cross Alberta Fires Appeal, supporting families and individuals impacted by the wildfires in Alberta. Ten per cent of proceeds will be donated to the Red Cross disaster readiness program, which allows the Red Cross to be ready to respond to emergencies such as the fires in Alberta at a moment’s notice with its network of highly-trained staff and volunteers across the country.

For sponsorship details and information please contact: Carole Adriaans at: carole@adriaansandassociates.com or call: 416-725-5825

To #backfortmac I went out to get a firsthand look at the ongoings in Fort Mac and met some amazing firefightes pic.twitter.com/K09dOK5OXT

In response to the catastrophic on-going fires that continue to burn and wreak havoc on Fort McMurray, a group of caring individuals have come together to inspire and galvanize others to raise funds for the thousands of people affected by this disaster.

On Monday, June 27th, at Roy Thomson Hall in Toronto, #BackFortMac – The Concert, will be staged, with all proceeds going directly to the Canadian Red Cross’ Alberta Fires Appeal.

Notable Canadian performers, and celebrities from the film, television and sports world, will join forces to pay homage and tribute to the brave and resilient residents, of Fort McMurray Alberta.

Watch for further details in the days ahead.

“The effects of this disaster have been devastating to individuals, families and the entire community of Fort McMurray,” says Conrad Sauvé, president and CEO of the Canadian Red Cross. “Thanks to fundraising initiatives such as the #BackFortMac concert, people have a chance to come together to enjoy some great Canadian talent while also providing an incredible contribution towards helping the Red Cross improve the lives of those in need.”