VANCOUVER, BC, Sept. 20, 2019/InsPress/ — Apollo’s Vancouver office has moved into a new home at 111 Water Street — a historic building dating back to the early 1900’s in the downtown neighbourhood of Gastown.

The Apollo Exchange’s Vancouver team will occupy the second floor of the new location, which holds a Heritage designation by the City of Vancouver for its influential role in shaping the city.

The owners never occupied the building, instead leasing it to the Canadian Fairbanks Company — the largest machinery and mill supply house in Canada — as their sixth Canadian location. 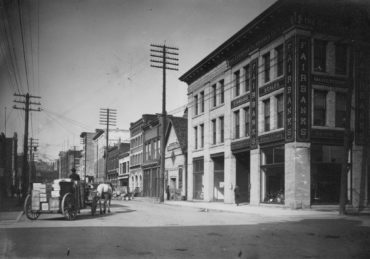 “Apollo identifies strongly with the ambitions of our new home’s original owners and tenants,” said Apollo CEO Jeff McCann. “Their frontier spirit that embraces adventure and rewards courage is embodied by every Apollo team member.”

The three storey building at the corner of Abbott and Water Street was designed by preeminent architects Edward Evans Blackmore and William Tuff Whiteway, both of whom were influential in shaping the look of Edwardian era Vancouver.

The building was restored in the 1980’s, and maintains its impressive masonry and brickwork. The second floor where Apollo’s offices are housed offers expansive views of the Vancouver Harbour, the North Shore, and mountains beyond.

About the APOLLO Exchange

The APOLLO Exchange (legal name “Apollo Insurance Solutions Ltd.”) is Canada’s largest online insurance marketplace. Apollo empowers brokers to instantly quote, bind, and issue policy documents for hundreds of classes of small business in real time, or white label the Exchange to sell directly from their website. Brokerages integrated with the Exchange are able to respond to the changing expectations of buyers and forward thinking employees.


Related
When “failing fast” works, and when it doesn’t: Insurtech CEO
Now that we’ve got Millennials working in the P&C industry, how do we keep them?
U.S. National Flood Insurance Program should include ‘greater participation’ from private market: Marsh
Marsh & McLennan’s Q2 risk & insurance revenue drops 2.3% to US$1.75 billion

It is widely acknowledged that the United States has a more litigious environment than Canada.