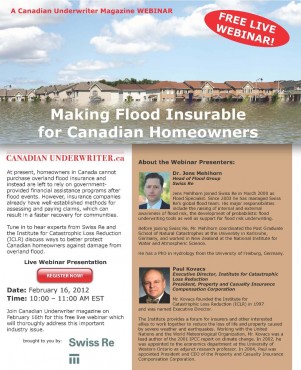 At present, homeowners in Canada cannot purchase overland flood insurance and instead are left to rely on government provided financial assistance programs after flood events. However, insurance companies already have well-established methods for assessing and paying claims, which can result in a faster recovery for communities.

Tune in to hear experts from Swiss Re and the Institute for Catastrophic Loss Reduction (ICLR) discuss ways to better protect Canadian homeowners against damage from overland flood.

Jens Mehlhorn joined Swiss Re in March 2000 as Flood Specialist. Since 2003 he has managed Swiss Re’s global flood team. His major responsibilities include the raising of internal and external awareness of flood risk, the development of probabilistic flood underwriting tools as well as support for flood risk underwriting.

Before joining Swiss Re, Mr. Mehlhorn coordinated the Post Graduate School of Natural Catastrophes at the University in Karlsruhe, Germany, and worked in New Zealand at the National Institute for Water and Atmospheric Science.

He has a PhD in Hydrology from the University of Freiburg, Germany.

Mr. Kovacs founded the Institute for Catastrophic Loss Reduction (ICLR) in 1997 and was named Executive Director.

The Institute provides a forum for insurers and other interested allies to work together to reduce the loss of life and property caused by severe weather and earthquakes. Working with the United Nations and the World Meteorological Organization, Mr. Kovacs was a lead author of the 2001 IPCC report on climate change. In 2002, he was appointed to the economics department at the University of Western Ontario as adjunct research professor. In 2004, Paul was appointed President and CEO of the Property and Casualty Insurance Compensation Corporation.