NEW ORLEANS – National Guard soldiers and other officials in boats and helicopters plucked more than 1,000 people from their homes and cars as “unprecedented, historic” flooding swamped Louisiana, the governor said Saturday, warning that the slow-moving storm would dump even more rain and cause further problems. 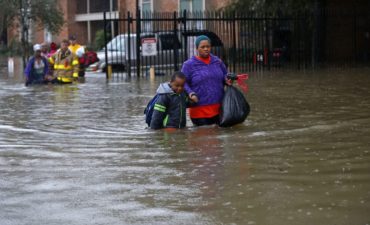 Residents wade through floodwaters from heavy rains in the Chateau Wein Apartments in Baton Rouge, La., Friday, Aug. 12, 2016. Heavy downpours pounded parts of the central U.S. Gulf Coast on Friday, forcing the rescue of dozens of people stranded in homes by waist-high water and leaving one man dead who became trapped by floodwaters. (AP Photo/Gerald Herbert)

During an aerial tour, an Associated Press reporter saw homes in parts of rural Tangipahoa Parish that looked little islands among flooded fields. Farmland was covered and streets descended into impassable pools of water.

“This is an ongoing event. We’re still in response mode,” Gov. John Bel Edwards said, urging residents to heed warnings to evacuate and not rely on their past experiences because the state has never seen flooding like this before.

Beginning Friday, 6 to 10 inches of rain fell on parts of Louisiana and an additional 4 to 6 inches was possible Saturday afternoon, National Weather forecaster Donald Jones said.

Mississippi and Alabama were also struggling with heavy rainfall.

In Baker, just north of Baton Rouge, residents said they had to be rescued by boats or wade though waist-deep, snake-infested water to reach dry ground. Dozens of them awoke Saturday morning on cots at a makeshift Red Cross shelter only a few blocks from their flooded homes and cars.

John Mitchell, 23, said he swam to safety with his pit bull after police officers in a boat picked up his 20-year-old girlfriend, her 1 year-old daughter and Mitchell’s father.

“This is the worst it’s been, ever,” Mitchell said. “We tried to wait it out, but we had to get out.”

Mitchell fears he lost their trailer home and his car, which was flooded up to the seats. A bag of clothes was all he had time to save as the water levels rapidly rose.

“People are keeping it together better than I thought they would,” he said of the roughly 60 people who stayed at the Red Cross shelter.

Thinking of, praying for my fam/friends in Louisiana with this catastrophic flooding. #NOLApic.twitter.com/GIzV2kZOTk

Shanita Angrum, 32, said she called 911 on Friday morning when she realized flood waters had trapped her family in their home. A police officer carried her 6-year-old daughter, Khoie, on his back while she and her husband waded behind them for what “felt like forever.”

“Snakes were everywhere,” she said. “The whole time I was just praying for God to make sure me and my family were OK.”

Angrum said her family probably lost most of their possessions, including two cars and the new school clothes she purchased for her daughter.

“We got to start all over,” she said.

The storm system was drifting slowly west from southeast Louisiana to an area along the central Gulf coast.

The governor declared a state of emergency Friday, and the flooding even forced him and his family out of the Governor’s Mansion, where chest-high water had filled the basement and electricity to the building had to be cut off.

“That’s never happened before,” he said.

The governor and his family relocated to a state police facility in the Baton Rouge area.

One man died Friday after slipping into a flooded ditch near the city of Zachary, said East Baton Rouge Parish Sheriff’s spokesman Casey Rayborn Hicks, who identified the victim as 68-year-old William Mayfield.

A second victim, 54-year-old Samuel Muse, was found in St. Helena Parish, where crews pulled his body from a submerged pickup on Louisiana Highway 10, authorities said.

Numerous rivers in southeast Louisiana and southern Mississippi were overflowing. The governor said some were expected to crest more than 4 feet above previous records and officials were not sure just how widespread the damage would be.

LSU cancelled its football fan day amid the floods.

In a 24-hour period, Baton Rouge had as much as 11 inches of rain. One weather observer reported more than 17 inches of rainfall in Livingston, according to the National Weather Service.

These rivers in Louisiana are all shattered records in less than 12 hrs. WOW #flooding #louisiana pic.twitter.com/MITpC7zAuO

The Tickfaw River, just south of the Mississippi state line in Liverpool, Louisiana, was already at the highest level ever recorded.

In southwest Mississippi, Leroy Hansford, his wife and stepson were among those rescued near Gloster, which had more than 14 inches of rain.

Hansford, 62, said waters from Beaver Creek, which is normally more than 400 feet away from his house, rose quickly overnight. He said another stepson who lives nearby alerted him.

“We woke up and the water kept on coming,” Hansford said. “It came up to my waist.” His wife told Hansford that it’s the highest she’s seen the creek in the 48 years she’s lived there.

In the small town of Crosby, Mississippi, the flooding affected nearly all of the 342 people who live there, said Wilkinson County Emergency Management Director Thomas Tolliver Jr. Some people were able to leave on their own, but others had to be recused.

Tolliver said Saturday the water has started to recede and those living in Crosby will be allowed back in by Sunday to assess the damage.