Over the past 20 years, 161 different insurance companies have exited the Canadian P&C market, 96% of which were voluntary exits, according to a new report from the Property and Casualty Insurance Compensation Corporation (PACICC). 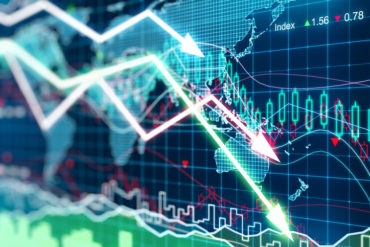 The report, the 11th in PACICC’s Why Insurers Fail research series, was released at the corporation’s annual general meeting, held at the Cambridge Suites Toronto hotel on Thursday. Grant Kelly, PACICC’s chief economist and vice president of financial analysis & regulatory affairs, authored the Why Insurers Fail: Exit Strategies of P&C Insurers report and presented a synopsis of the findings at the AGM.

According to Kelly’s research, between 1996 and 2015, about 96%, or 155, of the 161 firms exited the Canadian P&C marketplace voluntarily. Forty of the firms merged with another company, another 115 left voluntary in other ways and six – GISCO, Alta Surety Company, Canadian Millers’ Mutual, Markham General, Reliance Insurance Company and Home Insurance – were closed by regulators. The 161 companies who left represented approximately 25-30% of the insurance companies that competed over that 20-year period, Kelly noted.

“If I look back through the entire history of the insurance industry, there are literally hundreds of companies that no longer exist,” Kelly said during his presentation. “The lack of insolvencies over this period is evidence of a well-functioning insurance marketplace. Insurance insolvencies are very rare, in terms of exiting, it happens all the time.”

Of the 155 companies that voluntarily left the marketplace between 1996 and 2015, one-quarter (25%) merged. Thirty-five per cent were “wound-up” or “run off,” meaning that the insurer stopped selling new policies and attempted to settle liabilities of existing policies; 32% legally transferred their policy obligations to another insurer and 8% employed an “assumption reinsurance” agreement under which a reinsurer assumes, for a price, the obligations the existing insurer may owe under its policies. 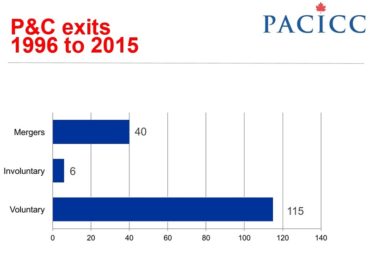 Kelly added that “the companies that merged appeared to be better reserved, so there was a reason they were attractive merger candidates,” By contrast, for the companies that voluntarily left or regulators closed, “our research shows that they are probably right to make those decisions – the reserves were inadequate,” he said.

“A core finding of all the other Why Insurers Fail papers, the number one reason why companies failed, is inadequate underwriting reserve,” Kelly said during his presentation, noting that of the involuntarily closed insurers, “their loss ratio was, in a lot of cases, twice the industry average at the end. Merger candidates were really close to the industry average.”

One of the secondary causes in “a lot” of failures, Kelly added, was the use of reinsurance or overreliance on reinsurance. “They become dependent,” he explained. “There is evidence that the companies who left involuntarily had a higher share of reinsurance recoverables compared to equity base. They really needed the reinsurance money to come through.”

One of the lessons learned from the latest review, for regulators, is that “the number one thing driving the company decision to exit is poor results,” Kelly said. “If we are going to watch for companies that are going to leave, long-term profitability is the most important thing.” So far, a single catastrophic event has not caused a company to go under yet, he added, noting that “it’s underwriting and poor reserving and that takes time to send them [over] the edge.”

Kelly concluded by saying, however, that he could envision a “unique set of circumstances” whereby PACICC may need to get involved to benefit customers and to help a company exit. For example, if one company had two profitable books of business, but “something bad happened to half the portfolio, would that make it a merger candidate or not?” he asked. “Would someone come in and say ‘I’ll buy half the company and the other half is on their own.’ Would the regulator allow that to happen? Potentially, you would have half the company with very little capital to support them anymore, very little assets to support them and potentially half the policyholders would be at risk and half wouldn’t. Could PACICC play a role in that circumstance? I don’t fully know the answer, I don’t know how we would decide to make that happen. I think that’s a conversation that would be worth having.”