The magnitude 6.0 earthquake that struck central Italy exactly one year ago is estimated to have cost 108 million euros, PERILS AG has reported. 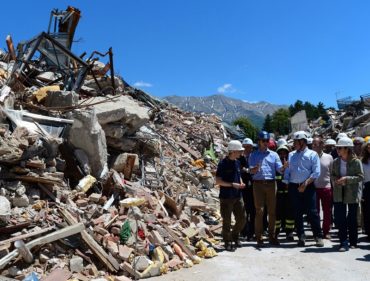 Prime Minister Justin Trudeau and wife Sophie Gregoire-Trudeau are escorted by officials as they visit Amatrice, Italy on Sunday, May 28, 2017. The area was effected by an earthquake that occured in August 2016. THE CANADIAN PRESS/Sean Kilpatrick

PERILS, the independent Zurich-based organization providing industry-wide catastrophe insurance data, disclosed its final loss estimate for the Aug. 24, 2016 earthquake on Thursday. The revised estimate of the property insurance market loss, based on loss data collected from insurance companies, compares to an earlier loss estimate of 66 million euros, was issued by PERILS three months after the event on Nov. 24, 2016.

In this final loss report, the market loss data are available by CRESTA zone and property line of business, PERILS noted in a press release. This loss footprint information is complemented by instrumental shaking intensities, peak ground accelerations and loss ratios showing the incurred loss from the earthquake as a percentage of the sums insured.

While the loss estimate is significantly below PERILS’ standard 200 million euro loss capture trigger for European events, “it has nevertheless been captured given the significant socio-economic impact of the earthquake,” the organization said in the release.

In comparison, the PERILS estimate of the insured loss of 1.24 billon euros from the Emilia-Romagna earthquakes in 2012 represented 9.3% of the total rebuilding costs of 13.3 billion euros estimated by the National Council of Engineers. “The difference in these figures reflects the significant variation in earthquake insurance penetration levels across Italy,” PERILS suggested.