2016 hail season one of the most severe in Texas history, with nearly US$700 million in estimated losses: CoreLogic

The 2016 hail season in Texas is already one of the most severe in the state’s history, with year-to-date results reaching the nine-year average for hail storm damage in the United States, according to CoreLogic, Inc., a global property information, analytics and data-enabled services provider. 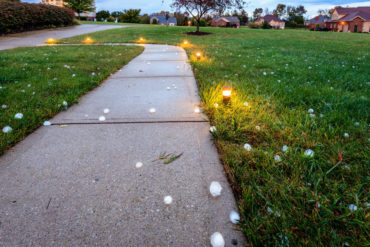 Regarding the San Antonio event, background information from CoreLogic showed that the majority of homes (21.36%) were impacted by hail of .75 inches, leading to an estimated US$10.8 million in residential losses. Hail over three inches in size impacted 4,569 homes, with combined residential losses reaching upwards of US$36.6 million.

“The timing could not have been worse for the greater San Antonio metro, and the storm proved to be a menace to those in its path over the course of the next hour,” the information stated. “The supercell struck first in the Helotes community, where it dumped hail larger than baseballs, then continued slowly across the northern half of San Antonio, damaging property at the University of Texas at San Antonio, the North Star Mall, and auto dealerships near the San Antonio airport along the way.” 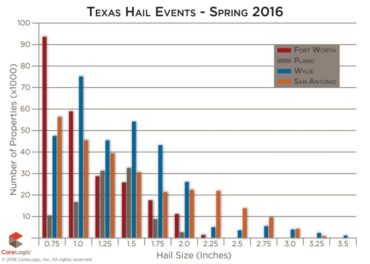 It then continued eastward across Alamo Heights and Fort Sam Houston, consistently pounding communities with hail ranging in size from golf balls to grapefruits. “This highly destructive storm came just a day after the devastating hail event in north Texas, and less than a month from two other, similarly impactful events in the Dallas-Fort Worth metroplex.”

The day before the San Antonio event, on April 12, a lone supercell thunderstorm erupted near the north-central Texas town of Scotland, before entering the city of Denton, where hail up to four inches in diameter was reported. The information from CoreLogic said that 17.31% of homes were impacted by hail of 1.5 inches, leading to an estimated US$18.5 million in residential losses. Hail over three inches affected 7,188 homes, with combined residential losses reaching upwards of US$57.5 million.

“Cities including Frisco, Plano and Wylie were especially hard hit,” CoreLogic reported. “Here, shredded siding, shattered windows, punctured roofs were the norm after baseball to grapefruit-sized hail pummelled the area, leaving as many as 80% of homes damaged.This was the third high-impact hail event to occur in the Dallas-Fort Worth metroplex in less than a month (March 17, Fort Worth, and March 23, Plano/Sachse), virtually ensuring that the spring of 2016 will be especially memorable for north Texas property owners, as well as the insurance and building industry.”

More information on the Texas hail storms is available at https://corelogic.maps.arcgis.com/apps/MapSeries/index.html?appid=d7320240a7cd4a73b91be7a0de82aba3.

More News
Related
U.S. insurers paid US$5.37 billion in total hail claims for 2008-14; 2011 and 2014 costliest years
Fort McMurray wildfire accounts for 98% of H1 insured cat losses in Canada, 29% of PCS-designated North American losses
Estimated insured losses for U.S., Caribbean from Hurricane Matthew US$2.5 billion to US$8 billion: RMS
Risk to U.S. property from severe convective storms as high as from hurricanes: Willis Re