Catastrophe bond issuance in 2017 reached record levels, including in Canada, as insurers and reinsurers sponsored approximately US$10.5 billion in cat bonds. 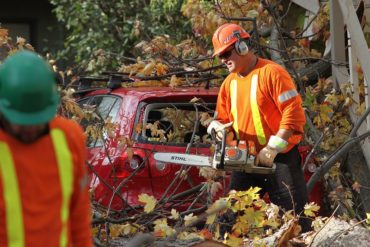 City of Kingston workers remove a tree in Kingston, Ont. Tuesday Oct. 30, 2012 that was downed by Superstorm Sandy and fell on a car. THE CANADIAN PRESS/Lars Hagberg

According to data from the Artemis.bm Deal Directory, there was more than US$10.5 billion in issuance last year, “up an astounding 88 per cent year-over-year,” Property Claim Services said in its 2017 cat bond report, released earlier this week. Sponsors completed 36 transactions, up from 20 the previous year, and the average transaction climbed 3.6% to US$290 million.

The majority – 32 of 36 cat bonds – had exposure to North America. Eight included Canada, another record, in transactions with aggregate limit of US$3.2 billion.

“ILS [insurance-linked securities] activity covering Canada has certainly gained momentum, which is particularly interesting the year after the largest catastrophe loss event in the country,” PCS assistant vice president Tom Johansmeyer told Canadian Underwriter on Thursday, referring to the Fort McMurray wildfire. “Eight transactions included Canada, which truly makes 2017 something of a breakout year. Both seasoned and new sponsors included Canada in their catastrophe bonds, indicating a broadening base of support that’s bolstered by year-on-year commitment.”

For investors, Canada provides some diversification, Johansmeyer explained. More importantly, sponsors are able to use cat bonds to manage their Canadian and U.S. risks to include events that affect both countries, such as Superstorm Sandy or an earthquake. “For reinsurers seeking retro cover, being able to use the same index for cats spanning U.S. and Canada is quite important, as it solves the problem of linking the U.S. and Canadian losses together.”

Johansmeyer said that the fact that adoption of PCS Canada in industry loss index triggers grew so rapidly from 2016 suggests that the industry is absorbing the lessons of the Fort McMurray wildfire. “The ILS market is comfortable with Canadian risk after a major loss year.”

Tailwind Re, a fourth-quarter transaction, brought US$400 million in total capacity (not just Canada), lifting total limits raised for transactions with exposure to Canada to approximately US$3.2 billion. Two Kilimanjaro Re transactions accounted for more than $1 billion of the blended total.

The record-breaking cat bond issuance last year “was so large as to become fundamentally different from prior years,” the report noted. “With the US$10-billion threshold finally pierced, it’s time for the global reinsurance and insurance-linked securities (ILS) community to stop contemplating what comes next and really put some effort into making ‘catastrophe bonds phase II’ a reality.”

Johansmeyer said this means getting past a market dominated by property cat risk, particularly North American cat risk. “In the next phase of ILS market development, we hope to see greater specialty lines engagement, especially cyber,” he said.