Was 2017 the costliest year ever for insured losses?

Munich Re has confirmed what industry analysts have long speculated — the hurricane trio of Harvey, Irma and Maria made 2017 the year of the highest global insured losses ever. 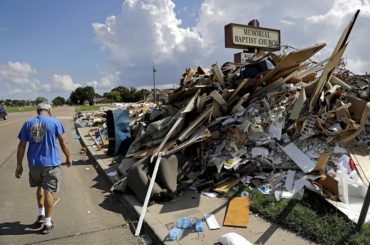 Wayne Christopher walks by a pile of debris outside the church he’d attended his whole life damaged from Hurricane Harvey in Port Arthur, Texas, Monday, Sept. 25, 2017. He and his wife had come here every Sunday and every Wednesday for more than four decades. This church is where he was baptized, where he met his high school sweetheart, then married her 46 years ago. “We have a lot of memories here. This is my home. I’ve been here all my life,” said Christopher. (AP Photo/David Goldman)

The final insurance bill for those three hurricanes and other global natural catastrophes, including a severe earthquake in Mexico, is expected to total US$135 billion. Overall losses, including uninsured losses, amounted to US$330 billion – the second-highest figure ever recorded for natural disasters, Munich Re said in a press release on Jan. 4.

Canada wasn’t hit as hard. Reinsurers licensed in Canada were the “main beneficiaries of the relatively quiet Canadian CAT year,” wrote Joel Baker, president and CEO of MSA Research, in MSA’s quarterly outlook report for the third quarter of 2017. The combined ratio in reinsurance in Canada improved 39% from 123.5% during the first nine months of 2016 to 84.5% during the same period in 2017.

“This against the disastrous global reinsurance industry which was hammered in 2017 by hurricanes Harvey, Irma, Maria and most recently the devastating wildfires in California,” Baker added. “Canadian primary insurers should count their blessings that that an event of the magnitude of the Fort McMurray fire didn’t happen this year, otherwise the 2018 renewal season would have been extremely tough.” 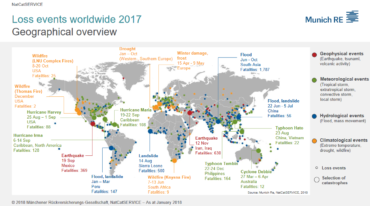 Munich Re estimated insured losses for Hurricanes Harvey and Maria at about US$30 billion each, and US$32 billion for Hurricane Irma.

Globally, the overall loss figure of US$330 billion for all types of natural disasters was almost double the 10-year, inflation-adjusted average of US$170 billion, the reinsurer reported. Losses from weather-related natural catastrophes set a new record: insured losses were almost three times higher than the average of US$49 billion. Munich Re statistics identified a total of 710 relevant natural catastrophes, significantly more than the average of 605.

The continent of North America, including the Caribbean and Central America, accounted for 83% of overall losses and 93% of insured losses worldwide. Approximately 160 events were recorded; 13 events resulted in overall losses of more than US$1 billion.