2017 industry catastrophe losses could reach US$190 billion before tax: Fitch

With Hurricanes Maria, Irma and Harvey causing devastation in Puerto Rico, Florida and Texas respectively over the course of three weeks, catastrophe losses in 2017 “will constitute a capital event” for some insurance and reinsurance carriers, Fitch Ratings Inc. has warned.

“Given the magnitude of the Maria-estimated losses, we now believe that 2017 catastrophe losses will constitute a capital event for a number of (re)insurance companies, as opposed to just an earnings event,” Fitch said Sept. 26. “However, the industry’s very strong capital levels going into this year greatly limit any risks to solvency.” 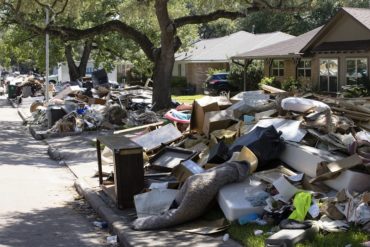 Flood damaged debris from homes lines the street in the aftermath of Hurricane Harvey on Thursday, Sept. 7, 2017, in Houston. (AP Photo/Matt Rourke)

Catastrophe losses for the global insurance and reinsurance sectors “will exceed” US$100 billion “and could reach close to” US$190 billion on a pre-tax basis, Fitch Ratings said Sept. 26 in a release.

On Sept. 12, Fitch said the combined high end of estimated losses from both Hurricanes Irma and Harvey is US$85 billion.

Two days before Hurricane Maria made landfall on Puerto Rico, A.M. Best Company Inc. warned that the storm “could severely test the financial strength of some of the insurers with concentrations of property risk in the Caribbean.”

Fitch Ratings analysts “believe there is heightened risk that combined loss concentrations to these events for several (re)insurers will result in a capital decline for full-year 2017,” the ratings firm said Sept. 26. “In some cases, this could result in ratings downgrades if not addressed through capital raises or other mitigating actions.”

In a 2016 report – Natural Catastrophes and Man-made Disasters in 2015 – Swiss Re noted that 2015 was the 10th year in row that no major hurricane made U.S. landfall, the longest stretch since the 1860s. In that paper, Swiss Re reported that 14 North Atlantic hurricanes made the list of top 40 most expensive insurance losses from 1970 through 2015.

Hurricane Katrina ranked first with nearly US$80 billion in insured losses. Katrina hit New Orleans in 2005 and those losses were adjusted for inflation to 2015 dollars.