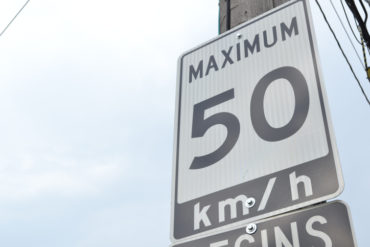 Findings from the campaign, which ran from May 1-6, revealed that 25% of the 9,400 vehicles were exceeding the posted speed limit, MPI said in a press release. In total, nearly 38,000 vehicles were monitored during the grassroots Citizens on Patrol Program ‘Spotlight on Speed’ week held in 29 communities.

According to statistics from MPI, speeding claims about 21 lives a year in Manitoba, in addition to the 600 people injured in speed-related crashes.

“The results of the ‘Spotlight on Speed’ week confirm that many drivers still do not understand the dangers associated with speeding,” said Ward Keith, MPI’s vice president of business development and communications and chief administrative officer. “Speeding is a high-risk driving behaviour that can have tragic consequences. Last year was the deadliest year on Manitoba highways in a decade and some of those crashes were speed related.”

The importance of safe speeds is heightened even more with the arrival of the Canada Day weekend and the start of summer vacation season, which results in heavier than normal traffic volumes on Manitoba highways, the release said. Over the last five July long weekends (2012-2016), speed was a factor in more than 200 injury collisions.

“Unfortunately, some drivers don’t think about the dangers of speeding, which can include driving over the posted speed limit or driving too fast for conditions,” Keith said. “The reality is that speeding reduces reaction time and extends stopping distances, both of which can contribute to unnecessary collisions, serious injury, or death.”