$39 billion worth of private property at risk, in San Francisco, from 1-metre extreme tide and 1.68-metre rise in sea level: RMS

In a possible but unlikely scenario of sea level rise, 1,160 private properties in San Francisco with a total exposure value of $20 billion, could be at risk in 84 years if no resilience measures are put in place, according to a recent report that uses data from Risk Management Solutions Inc. 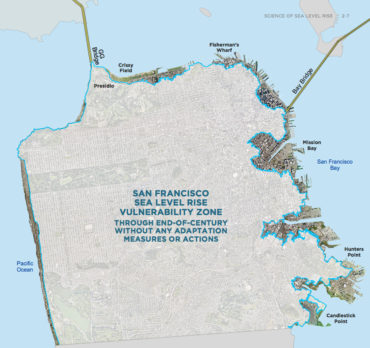 “Our preliminary estimate is that the City has approximately $75 billion in assets that are vulnerable to inundation due to [sea level rise] and extreme storms,” Mayor Edwin Lee wrote in the report San Francisco Sea Level Rise Action Plan, compiled by the City and County of San Francisco. All figures are in United States dollars.

“RMS found that $55 billion of private and public sector property in the low-lying coastal areas around San Francisco would be permanently inundated by the end of the century,” RMS said in a release Wednesday. “The calculation assumes that no measures are put in place to increase the city’s resilience and reflects present day costs to rebuild the affected buildings and infrastructure, rather than the market values 84 years from now.”

Total public sector assets at risk – from a sea level rise of 66 inches (1.68 metres) plus a one-in-100 year extreme tide of 42 inches – are $37 billion, according to the report, which includes a graph of sea level rise projections, relative to year 2000. The total value of private properties at risk in the same scenario is $39 billion.

“The most likely projections for San Francisco are based on a moderate level of global greenhouse gas (GHG) emissions and continued accelerating land ice melt patterns,” according to the report.

The report includes a chart on private property value at risk in San Francisco, based on the upper range estimate of sea level rise by 2100. That chart includes value of properties at risk from both from a possible but unlikely rise in sea level, by 2011, by 66 inches, and from a combination of this sea level rise with a 1-in-100 year extreme tide.

There was $4.5 billion worth of port building facilities at risk in the 66-inch sea level rise scenario.

RMS used a used a “valuation model and property data to create a building-by-building exposure dataset,” the City and County of San Francisco said in the report. That data was then overlaid on to inundation footprints.

The report was the result of a task force – convened by Lee in March, 2015 – of 12 city departments.

“My charge for this plan was three fold,” Lee wrote. “First, to explain what is at risk. A high-level analysis was completed to identify our exposed risk for both public and private assets. Second, to review the complex regulatory environment that governs coastal planning and development activities. Finally, to identify actions that San Francisco can take now and in the near future to meet the challenge of rising seas, in partnership with its neighbors and regional leaders.”