A four-kilometre-long ice jam on the Saint John River is creating flooding concerns in New Brunswick.

The ice jam has already flooded part of Route 105 leading to the Tobique First Nation and prompted the closure of three schools in the area near Perth-Andover, N.B., not far from the border with the state of Maine.

“There’s nothing you can really do about [ice jams] on the Saint John River,” Geoffrey Downey, a spokesperson for the provincial River Watch program, told The Canadian Press in an interview Monday. “You just have to wait them out and hope the impact isn’t too severe when the water works its way around.”

Ice jams occur when pieces of ice along a river clump together and block the water from flowing. When the ice finally begins moving, the backed-up water can rush through, causing flooding. Downey said a mobile command post has been set up in the region as officials monitor three ice jams on the river.

The ice jam at Perth-Andover originally measured about eight kilometres in length, but it has since compressed, Downey told The Canadian Press. There are smaller ice jams at Sainte-Anne-de-Madawaska and Hartland in the western part of the province. 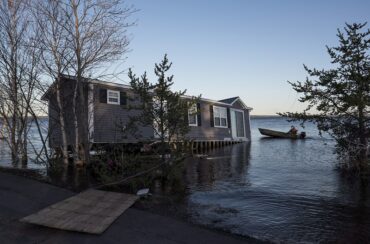 A trailer home sits in the water after being moved off its foundation by floodwater from the Saint John River on Grand Lake in New Brunswick on Friday, May 11, 2018. THE CANADIAN PRESS/Darren Calabrese

Recent heavy rains also caused flooding in southern New Brunswick. In one case, a culvert was washed out north of Moncton; another saw a truck pushed off the road by floodwaters near Sussex.

Insurance Bureau of Canada (IBC) is reminding New Brunswick property owners to prepare for the 2021 flood season by keeping a current, detailed inventory of home contents, assembling an emergency supply kit, and creating a 72-hour preparedness plan. It also suggested anchoring fuel tanks to the floor, since they can tip over or float in a flood, causing fuel to spill or catch fire.

“Twice in recent years, we have seen the devastating effects that flooding can have on communities in New Brunswick,” said Graham Little, IBC’s government relations manager. “Warming temperatures, melting snow, ice jams and rain are all contributing factors to flood conditions. IBC is asking New Brunswickers in flood-prone areas to be on the alert and to stay safe.”

One of the larger flood events in recent memory occurred in May 2018, when as many as 12,000 homes and businesses in flood zones were damaged by flooding from the Saint John River. The river, swollen by heavy rains and snowmelt, swamped homes and caused some cottages to collapse. Some buildings even floated off their foundations.

IBC said it doesn’t believe there have been any claims filed so far in the most recent flooding event. But if flooding is expected to cause more than $25 million in insured losses, Catastrophe Indices and Quantification Inc. (CatIQ) would survey insurers and IBC would report total insured losses about a month later.