49% of Alberta SMEs surveyed do not have business continuity plan: ATB Financial 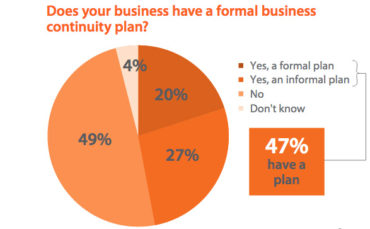 In its Business Beat Survey, 300 owners and operators of small and mid-sized enterprises were asked in a phone survey whether their organizations have formal business continuity plans.

One in five said they have a formal plan and an additional 27% said they had an informal plan. Four per cent did not know while the remaining 49% said they did not have one.

“It should be noted that the larger the business, the higher the likelihood of it having a continuity plan in place,” ATB Financial stated. “More than three quarters (76%) of mid-sized businesses (50 or more employees) are likely to have a continuity plan while two thirds (64%) of small, home office business owners (0 employees) to not.”

ATB Financial is the trade name of Alberta Treasury Branches, which provides personal and business banking services in the province.

The survey was commissioned by ATB Financial and conducted Aug. 8 through 19 by NRG Research Group. The study excluded agriculture (farms or ranches), government, financial institutions and businesses with 500 or more workers.

ATB Financial defined small as fewer than 50 employees and medium-sized as having between 50 and 499 employees.

Respondents were also asked whether they “experienced a significant business disruption in the past.” The majority (76%) said no, 23% said yes and 1% did not know.

Nearly half (46%) of respondents “said they did not carry disruption insurance,” ATB Financial stated.

“A plan that contemplates how to deal with disruption can allow business owners to respond from a position of strength and thoughtfulness versus panic,” stated Teresa Clouston, executive vice-president, business and agriculture of ATB, in a release. “We recommend building a recovery plan into your business plan and revisiting that plan yearly.”

In the survey, respondents were also asked whether their businesses currently have large loans out with their banks for “commercial mortgage, equipment, etc.”