$5.3 billion to be re-invested in Alberta economy over three years to rebuild Fort McMurray: Conference Board of Canada report

About $5.3 billion will be re-invested in Alberta’s economy over the next three years to rebuild Fort McMurray following the massive wildfire in May, according to a new Conference Board of Canada report on the economic impacts of Canada’s most costliest natural disaster. 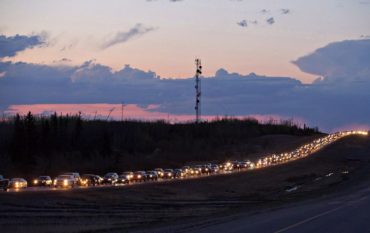 Traffic lines the highway as residents leave Fort McMurray, Alta., on May 3, 2016. THE CANADIAN PRESS/Jason Franson

“A massive injection of funds from provincial and federal governments, insurance companies and private sources will go towards the clean-up and rebuilding effort in and around Fort McMurray,” said Pedro Antunes, the Conference Board of Canada’s deputy chief economist, in a press release. “The wildfires will leave a sizeable dent in public finances, while property and casualty insurers will have to absorb the massive cost of claims.”

The wildfire forced the evacuation of about 88,000 people and consumed nearly 590,000 hectares, roughly the size of Prince Edward Island, the report said.

The research, supported with funding from the Insurance Bureau of Canada (IBC), was released on Tuesday. The Conference Board press release said that the lion’s share of the $5.3 billion will be absorbed by the insurance industry, which is estimating $3.6 billion in claims – $2.4 billion in personal property and $1.2 billion in commercial and industrial payments. In contrast, the federal and provincial governments covered the majority of payments in the 2013 Alberta floods. “This is because flood insurance for residences was unavailable in the province and elsewhere in the country, while fire insurance coverage is almost universal,” the release said.

As a result of the wildfire, an estimated 1,935 residential and 23 commercial/industrial structures were damaged or destroyed and more than 12,000 auto claims are expected, the Conference Board said. Close to 45,000 claims are expected to be processed at an average payout of almost $80,000.

Overall, the Conference Board expects the impact of the wildfire to shave $456 million, or 0.1% from real gross domestic product (GDP) in Alberta in 2016. The sheer size of the firefighting, emergency services, and clean-up efforts will generate plenty of economic activity, but will not offset the losses in oilsands production in May and June, the report found. Estimated production valued at over 47 million barrels and $1.4 billion in revenues will be lost to producers and the province in 2016. On its own, this lost production would take 0.5% out of economic growth in the province. Mining activity is expected to return to normal in 2017 and thereafter.

The rebuilding effort is expected to boost economic activity in Alberta by $1.1 billion, or 0.4% of GDP next year. The Conference Board expects more than 2,500 homes to be rebuilt over the next three years along with repair works, furnishing of homes and purchasing of new cars, helping to boost residential construction and retail sales.

According to the report, the increased economic activity will generate close to 16,000 person-years of employment between 2016 and 2019; employment would peak at almost 9,000 jobs next year. The recession has left the province with excess capacity and excess labour, especially in industries like construction, manufacturing and many business services that were hardest hit by the recession. Real GDP in the Regional Municipality of Wood Buffalo is expected to decline by more than 12% in 2016, but the Conference Board expects the rebuilding effort to boost real GDP by 4.1 percentage points in 2017, with the construction industry accounting for the lion’s share of the gains. This work will add nearly 5,100 jobs to the Wood Buffalo economy in 2017, the report said.