More than 90% of American consumers surveyed by The Travelers Companies Inc. reported they were “at least somewhat” concerned by distracted driving, while more than half of business respondents reported the same concern, Travelers said in a report announced Monday. 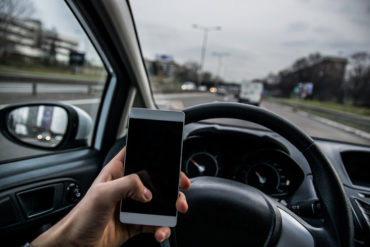 The survey began in 2013. In this year’s survey, more than 9 in 10 American consumers (92%) “are now at least somewhat concerned about distracted driving and 58% rate it as a major concern,” Travelers stated.

Travelers broke down the results by industry.

In transportation, the percentage of respondents who “worry a great deal or some about this threatening my business” was: 60% for legal liability; 57% for fluctuations in oil/energy costs; 52% for distracted driving as a cause of accidents; 45% for risks related to extreme weather/natural disasters; and 45% for driving accidents caused by employees.

In banking and financial services 72% “worry a great deal or some” about cyber risks/data breaches threatening their business, Travelers stated in the report.

“Cyber attacks are a significant concern among consumers and business leaders as mobile devices, wearable technology, connected workspaces and smart homes become more common,” Travelers said in a release. “Half of consumers fear someone will gain unauthorized access to their personal information via smart devices. The report found that victims of a data breach or cyber attack – nearly one-quarter of consumers surveyed – say they have not since taken any greater precautions than those who have not experienced a breach.

With technology business respondents, 65% of respondents “worry a great deal or some” about cyber risk/data breaches threatening their business. More than half, or 51%, worried about protecting intellectual property/trade secrets while 42% worried about legal liability.

“Professional mistakes, including errors and omissions (39%), rank among the top legal liability risks for all businesses, followed closely by employee lawsuits alleging discrimination, harassment, wrongful termination and other employment-related claims (36%),” Travelers said in the report. “Other legal liability concerns include driving accidents caused by employees (30% of all companies worry about this), and faulty products or products that harm customers (24% worry about this). As is the case for many types of risks, midsized and large businesses are more likely than small businesses to worry about specific legal liability risks.”

Within banking and financial services, 41% of respondents said they worry about global/political conflict and terrorism.

Among respondents in manufacturing, 51% said they worry about supply chain risk.