More than 6.8 million U.S. homes with reconstruction value of US$1.5 trillion at risk from hurricane storm surge: CoreLogic

More than 6.8 million homes on the Atlantic and Gulf coasts of the United States are at potential risk of damage from hurricane storm surge inundation, with a total reconstruction cost value of more than US$1.5 trillion, CoreLogic said on Wednesday.

CoreLogic, a global property information, analytics and data-enabled services provider, examined risk from hurricane-driven storm surge for homes along the Atlantic and Gulf coastlines across 19 states and the District of Columbia, as well as for 88 metro areas. Homes are categorized among five risk levels, including Low, Moderate, High, Very High and Extreme.

The 2016 Storm Surge Report noted that in addition to the number of homes at risk, the analysis also provides the reconstruction cost value (RCV). The RCV is the cost to completely rebuild a property in case of damage, including labour and materials by geographic location, assuming a worst-case scenario at 100% destruction, CoreLogic explained in a statement.

Using more advanced and granular data than in previous years, the 2016 analysis shows an increase from 2015 in the overall number of homes at risk of storm surge as well as an increase in the reconstruction value of these homes, the report noted. Despite the overall increases, the 2016 analysis shows a decrease in the most extreme category for both the number and value of homes at risk.

“Using more granular-level data has given us an even clearer picture of which homes are at risk of storm surge damage,” said Dr. Tom Jeffery, senior hazard risk scientist for CoreLogic, in the statement. “Despite the overall increases in risk, we were glad to see that the number and value of homes in the most extreme, and dangerous, category actually declined. It just goes to show the power of how advanced data can improve risk assessment at the property level.” 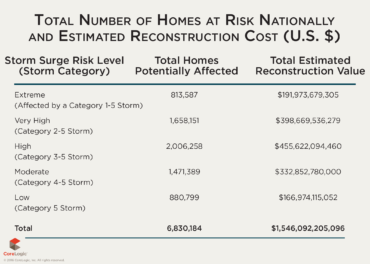 At the state level, Texas and Florida, which have the longest coastal areas, consistently have more homes at risk than other states. Florida ranks first with 2.7 million at-risk homes across the five risk categories and Texas ranks third with 531,169 at-risk homes. Since the number of homes at risk strongly correlates with the accompanying RCV, these two states rank first and fifth, respectively for having the largest RCV, the statement said.

At the local level, 15 Core Based Statistical Areas (CBSAs) account for 67.3% of the 6.8 million total at-risk homes and 68.3% of the total US$1.54 trillion RCV. “This disproportionate distribution of homes suggests that the location of hurricanes that hit land is often a more important factor than the number of storms that may occur during the year,” the statement said. “The Miami CBSA, which includes Fort Lauderdale and West Palm Beach, has the most homes at risk totaling 780,482 with an RCV of just under US$144 billion. By comparison, the New York City CBSA has slightly fewer homes at risk at 719,373, but a significantly higher total RCV totaling US$260 billion.”