More than six in 10 Canadians (62%) oppose or somewhat oppose banning ridesharing services such as Uber, according to recent polling conducted by Nanos Research. 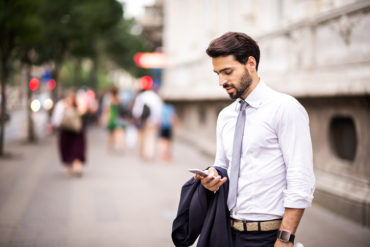 When asked their level of support for banning services like Uber, slightly more than three in five Canadians oppose (41%) or somewhat oppose (21%), while less than three in ten Canadians support (11%) or somewhat support (18%) banning ridesharing, said a press release on Tuesday from the Arlington, Va.-based Consumer Choice Center (CCC). Nine per cent were unsure. The centre completed a summary of the results of the survey, titled Opinions of Canadians on consumer issues.

“The results of the survey clearly show that Canadians enjoy the expanded options offered by ridesharing services like Uber,” said David Clement, North American affairs manager of the CCC, in the release. “Not only that, this demonstrates that legislative moves to ban, or over-regulate, ridesharing goes against the wishes of the public at large. Legislators should take note of public opinion on ridesharing and avoid heavy handed regulations, or outright bans, on ridesharing services,” Clement suggested. 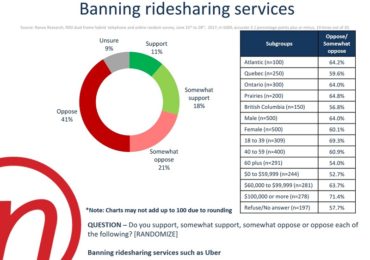 The survey also explored opinions on homesharing services such as Airbnb. When asked their level of support for banning homesharing services, a majority of Canadians said they oppose (37%) or somewhat oppose (23%) banning these services, while just over one in four Canadians said they support (8%) or somewhat support (18%) this. Thirteen per cent were unsure.

The poll also explored Canadians’ opinions on purchasing alcohol from other provinces and transporting it across provincial boundaries, selling tobacco products in packaging without branding, regulation of vaping, and housing prices, among other topics.