Six weeks after it warned of a “systemic problem” of “vessel modifications and their impact on stability” in the Canadian commercial fishing industry, the Transportation Safety Board of Canada found that the operating practices of one commercial fishing boat that capsized and sunk was different from those presented in its stability booklet. 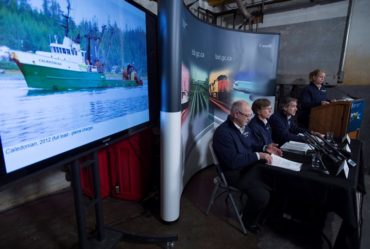 Members of the Transportation Safety Board, Glenn Budden, (left to right) Kathy Fox and Marc-Andre Poisson release their report during a news conference in Steveston, B.C. Wednesday, Dec. 14, 2016. The report gave investigation findings for the 2015 sinking of the fishing vessel Caledonian off the coast of Vancouver Island. THE CANADIAN PRESS/Jonathan Hayward

After the Caledonian sunk off the coast of Vancouver Island Sept. 5, 2015, three of the four crew members died and only the survivor was wearing a personal floatation device, TSB said in its investigation report released Wednesday.

In September, 2015, the Caledonian was trawling for hake about 20 kilometers west of Nootka Sound, B.C., reported TSB, which is separate from Transport Canada and investigates incident in aviation, railways, pipelines and marine.

Built in 1974, the Caledonian was a 100-foot vessel owned by Caledonian Holdings Inc. of North Vancouver, British Columbia

“Below the main deck was the engine room (located forward), 6 fish holds (3 on each side), and 8 fuel tanks (4 on each side),” TSB said in the report. “There were also freshwater tanks located below the forward fish holds.”

At about 2:00 p.m. Sept. 5, 2015, the crew of the Caledonian “prepared to haul in the trawl,” TSB reported. “This involved adding seawater to the ice in the 2 centre holds so that they were filled halfway. At this time, the vessel had a slight port list.”

After the crew stored a bag of hake, the port list began to increase.

Another bag of hake was “pulled up the trawlway and was partially suspended from the boom,” TSB continued in the report. “The deck hatch cover for the centre port hold had remained off after the initial bag had been stowed. The vessel was now trimmed by the stern and listed further to port, causing additional seawater to ship onto the deck, submerging nearly half of the trawl door.”

Eventually, about half a meter of water covered the deck and the vessel capsized.

The vessel sank about 10:00 p.m. that night. The master and mate jumped into the water and the mate reached life raft, climbed inside and was later rescued.

TSB released Oct. 31 its watch list of safety issues that it says need to be addressed. One of those issues is commercial fishing safety.

“Several recent investigations into fatal accidents have found a range of safety deficiencies-vessel stability, crew training, unsafe operating practices, emergency preparedness, and carriage of immersion suits and emergency position-indicating radio beacons (EPIRBs)-that once addressed would reduce those risks,” TSB says on its watch list page. “Many of the causal and contributory factors in an accident are systemic problems that need systemic solutions.”

Systemic problems include vessel modifications and their impact on stability.

In its investigation report on the capsizing of the Caledonian, TSB is recommending that the Transport Canada “establish standards for all small fishing vessels that have had a stability assessment to ensure their stability information is adequate and readily available to the crew.”

Nearly 40 years ago, “the Caledonian had been subjected to an inclining experiment to determine the vessel’s lightship weight and centre of gravity,” TSB said in its investigation report. “Based on this information, a stability booklet was developed and approved by TC.”

However, TSB’s investigation into the tragedy “identified operational practices that differed from the assumed loading conditions described by the stability booklet.”

TSB made six findings as to cause and contributing factors.

“The Caledonian’s lightship weight had increased over the years, exacerbating the risk of stability loss and rendering it vulnerable to the additional forces acting on it at the time of the occurrence,” TSB said. “The cumulative effects of the forces from the water on deck, the sea conditions, the drag of the port side trawl door, and the course alteration also contributed to the loss of the vessel’s righting energy, leading it to capsize.”

TSB added that no lifesaving appliances (other than the personal flotation device worn by the mate) was used before the capsizing.

“At the TSB, we have seen similar circumstances occur far too often,” TSB chair Kathy Fox said in a press release Dec. 14. “In fact, on average, 10 fishermen die each year somewhere in Canada’s commercial fishing industry.”