Organizations representing the actuarial profession in Canada and the United States have launched the Actuaries Climate Index (ACI), a quarterly measure of changes in extreme weather events and sea levels. 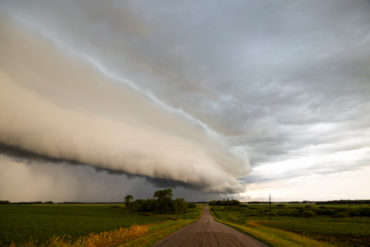 The ACI, available online at ActuariesClimateIndex.org, is an educational tool designed to help inform actuaries, public policymakers and the general public about climate trends and some of the potential impacts of a changing climate on Canada and the U.S., ACI said in a press release on Wednesday. It was developed by the Climate Change Committee (CCC), a joint effort of the Canadian Institute of Actuaries, the American Academy of Actuaries, the Casualty Actuarial Society and the Society of Actuaries. 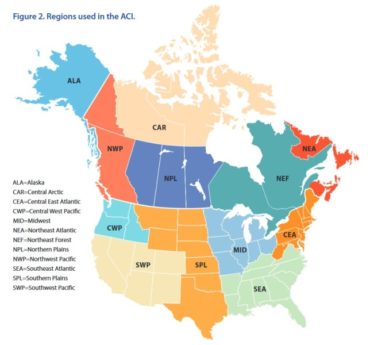 According to the release, the ACI looks at Canada and the continental U.S., placed into 12 different regions. Higher index values indicate an increase in the occurrence of extreme weather events. “The latest Actuaries Climate Index values show an increase in the impact of extreme weather events, such as high temperature, heavy precipitation and drought,” the release noted.

“The actuarial toolkit is quite unique,” said David Dickson, president of the Canadian Institute of Actuaries, in the release. “The profession wanted to demonstrate that actuaries and climate scientists could combine their education and training to come up with a tool that could be of use to governments, environmental groups and scientists. I am convinced that we succeeded, and we will be working with our partners to add even more value to the index.”

Doug Collins, chair of the CCC, added that the index is designed to provide objective data about changes in frequency of extreme climate events over recent decades in Canada the continental U.S. “Actuaries are experienced in the assessment and mitigation of the financial consequences of risk, and we have developed the index for analyzing the climate,” he said. 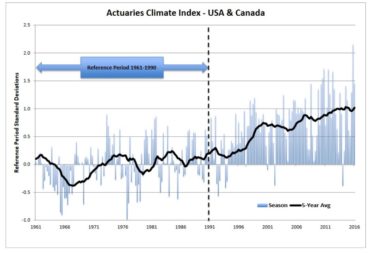 The most recent periods in the index show for Canada and the U.S. combined, the value for winter 2016 was 1.46, the sixth-highest level below the peak in the fall of 2015. The high value was caused primarily by high temperatures in eastern Canada and the northeastern U.S., as well as heavy precipitation in “many locations.”

In addition to the ACI, the organizations are also developing a second index – the Actuaries Climate Risk Index – which will measure correlations between changes in the frequency of extreme events as measured by the index and economic losses, mortality and injuries.