Lower costs and higher efficiencies can be realized through adoption of smart contracts, with potential annual savings in the personal motor insurance industry alone amounting to US$21 billion globally thanks to automation and reduced processing overheads in claims handling, Capgemini Consulting contends. 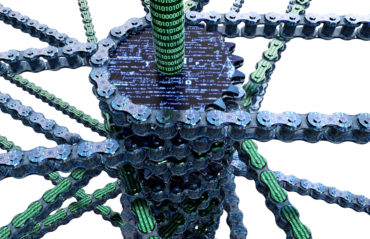 “Our study confirms that smart contract adoption will lead to reduced risks, lower administration and service costs, and more efficient business processes across all major segments of the financial services industry,” states the report issued Tuesday, Smart Contracts in Financial Services: Getting from Hype to Reality.

“These benefits will accrue from technology, process redesign as well as from fundamental changes in operating models, as they require a group of firms to share a common view of the contract between trading parties,” the report notes.

Report findings are based on interviews with banking and insurance industry professionals leading blockchain and smart contract initiatives at their firms, as well as academics focused on this field. Capgemini also undertook web-based research of the smart contracts space to complement primary research findings.

“When these smart contracts are put on the blockchain or a distributed ledger, there is a strong element of permanence and immutability attached to them,” the report contends. 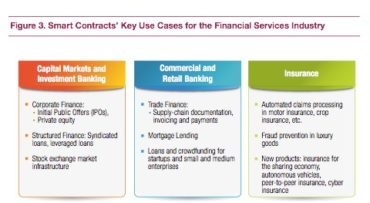 “By automating parts of business processes in the short run and possibly entire processes in the long run, smart contracts would significantly reduce the costs associated with areas such as compliance, record keeping, and manual intervention,” Capgemini maintains.

“Consumers will benefit from more competitive products, such as mortgage loans and insurance policies, along with simpler processes that are free of many of the hassles of today’s customer experience,” the new report states.

Specifically for insurance, “consumers could also expect lower premiums as insurers potentially pass on a portion of their annual savings to them.”

With regard to auto insurance, “smart contracts that bring insurers, customers and third parties to a single platform will lead to process efficiencies, and reduced claim processing time and costs,” the new report states.

And once third parties such as garages, transport providers and hospitals are part of the distributed ledger, “they will be able to provide quicker support against claims to customers and can expect faster settlement of claims.”

The report calculates the savings from smart contract adoption for the motor insurance market in the United Kingdom – which processed 3.7 million claims and spent US$13.3 billion in claim costs and expenses – would be approximately US$1.67 billion, or 12.5% of the total costs.

Based on the U.K. figure, it further estimates annually US$21 billion could be saved by the global motor insurance industry through the use of smart contracts.

That “cost savings amounts to a reduction of US$90 on average on every premium payment if the insurers pass on all of the savings generated from smart contracts adoption to consumers, and US$45 per premium in case the insurers choose to pass on only 50% of savings,” the report points out.

“Smart contracts, enabled by blockchain or distributed ledgers, have been held up as a cure for many of the problems associated with traditional financial contracts,” Capgemini notes.

Traditional financial contracts “are simply not geared up for the digital age. Reliance on physical documents leads to delays, inefficiencies and increases exposure to errors and fraud,” the company argues. “Financial intermediaries, while providing interoperability for the finance system and reducing risk, create overhead costs for and increase compliance requirements.” 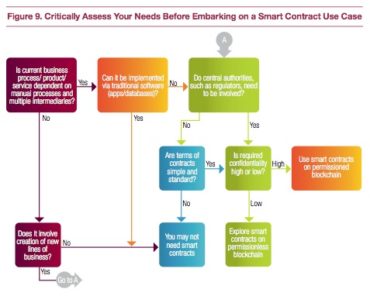 The report acknowledges challenges exist around both the security and privacy of data stored on public blockchains and permissioned ledgers. Beyond that, interoperability with legacy systems and the scalability of transaction processing also needs resolving.

That said, “financial institutions must start preparing themselves for the arrival of smart contracts, readying existing systems and processes and experimenting with the basic functionality offered,” the report recommends.

“They ought to begin by identifying the changes that will be required, including to IT systems, processes and change management policies. They should also begin the process of carefully building their external ecosystem, choosing critical new players in the value chain,” Capgemini notes.

Further, smart contracts will “need to be able to work with trusted external data sources if they are to utilize external information,” the report states.

“Banks and insurers can also focus on conceptualizing entirely new products and services that are underpinned by smart contracts,” Capgemini suggests.

“New products and services lend themselves to early experimentation and an agile process of tests, trials and rapid iterations. Also, minimal or no contact with legacy systems can avoid integration and interoperability challenges,” it adds.

A permissioned, distributed ledger smart contract system, the report notes, would make most sense for the financial services industry in the majority of cases. It assures a secure, private and scalable platform connecting all key stakeholders:

The report acknowledges that the regulatory environment will need to catch up with the speed of development in smart contracts and distributed ledgers.

“For contracts to be enforceable, the identity of the parties has to be confirmed to a degree that the legal system and regulators consider appropriate, and electronic signatures need to be considered valid,” the report states.

“Regulators ought to favour increased adoption of smart contracts as they stand to gain from simplified regulatory compliance and reporting,” it emphasizes.

“Considering the scale of this digital upheaval, it will be at least three years before smart contracts enter the mainstream,” predicts the report. “Smart contracts that do not require distributed ledgers could be viable by the end of 2017. We anticipate mainstream adoption to begin in the early years of the next decade.”