A water bomber that crashed in Alberta was too low to recover from an incipient spin caused by severe turbulence formed from a “fire whirl,” the Transportation Safety Board of Canada suggested in an investigation report released Thursday. 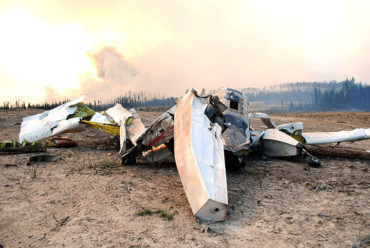 View of accident aircraft from the front. Photo: Transportation Safety Board of Canada.

On May 22, 2015, four Air Tractor AT-802A Fire Boss airplanes were dropping water on a forest fire northwest of Cold Lake, Alberta, TSB said in the report on the crash. TSB suggested the pilot – who was killed – would not have been able to see the fire whirl that caused the turbulence.

That afternoon, four Fire Boss airplanes, operated by Conair Group Inc., completed two water drops on the northern edge of the fire after skimming water from Burnt Lake, about 1 to 2 miles west of the fire. The Fire Boss is a single engine airplane with a tail wheel. The water bombers were dropping the water from the “specified bombing height” of about 150 to 200 feet above ground level. After releasing the water, the planes “would climb back up to the circuit height,” about 1,000 feet above ground level.

One of the Fire Bosses that did not crash – designated T693 – conducted the third drop at about 4:30 p.m. Thirty-five seconds later, T693 encountered severe turbulence. Its data acquisition alarm monitor (DAAM) recorded a change from 4.8Gs to 2.1Gs in 1.2 seconds. The pilot struck his head on the canopy and the airplane yawed left and rolled right. The airspeed dropped to zero but about 13 seconds after encountering the turbulence, the pilot recovered, TSB reported.

However, 10 seconds after T693 encountered the turbulence, Air Boss T692 also encountered severe turbulence. Its DAAM recorded a change from 4.2Gs to -3.2Gs in one second.

“T692 was seen to pitch to a nose-up attitude and climb to approximately 400-500 feet” above ground level, TSB reported. “The aircraft was then observed to roll left and enter a nose-down attitude.” T692 struck the ground right wing low. About 11 minutes later, a civilian helicopter landed and the first responders discovered the pilot – identified by media reports as William Hilts – had no pulse. An RCAF search and rescue crew later extracted Hilts and sent him to hospital. 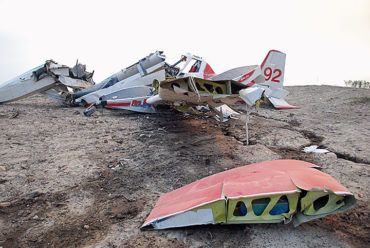 View of accident aircraft from the left. Photo: Transportation Safety Board of Canada.

TSB found that the airplane was travelling at 129 knots ground speed when it entered a two-cell vortex. Based on DAAM data from both the plane that crashed and the other water bomber that encountered severe turbulence, TSB concluded the two-cell vortex was “likely” formed as a fire whirl developed.

“The pilot could not see the fire whirl, as it had not yet ingested enough loose debris to make it visible,” TSB reported. “Because the pilot had not experienced any difficulties on the previous drops, he likely would not have anticipated what was in the flight path.”

A report by two mechanical engineers with  the U.S. Department of Agriculture (Jason Forthofer and Bret Butler), identified four “common factors for the development of fire whirls,” TSB said in its report. Those factors are a large heat source, unstable atmosphere, low-to-moderate ambient wind and a “strong source of vorticity/rotation.”

The report TSB cited – by Forthofer and Bulter – appeared in Proceedings of the 3rd Fire Behavior and Fuels Conference.

After the Conair Air Boss entered the fire whirl near Cold Lake, “the pilot was likely thrust into the canopy by the (negative) 3.2G acceleration,” TSB said. “Exiting the core would then put the nose of the aircraft in the updraft again while the tail was still in the downdraft, causing the stalled aircraft to pitch up violently and enter an incipient spin.”

The entry into the fire whirl was one cause and contributing factor identified by TSB.

The other was the low operating altitude, which TSB suggested “made recovery” from the incipient spin “improbable.”

This past March, Conair added, to its training program, a session “that addresses the environmental risks around a forest fire and how to recognize these conditions.”

Conair also installed 5-point harnesses in its AT-802 water bombers.

There is currently no regulatory requirement for formal training on weather hazards around a wildfire, TSB suggested in the report.