AIR Worldwide is estimating the industry insured losses from the California wildfires will be between US$2 billion and US$3 billion. 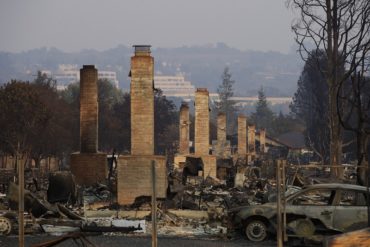 FILE – In this Oct. 13, 2017 file photo, a row of chimneys stand in a neighborhood devastated by a wildfire near Santa Rosa, Calif. CalFire spokesman Daniel Berlant said Monday, Oct. 23, 2017, the estimate of homes and structures destroyed was boosted from 6,900 late last week to 8,400 as officials neared completion of their damage assessment. (AP Photo/Jae C. Hong, File)

Multiple wildfires exacerbated by hot, dry and windy conditions spread across eight counties of California starting in early October. Twenty-two active wildfires were reported by the California Department of Forestry and Fire Protection (CAL FIRE) on Oct. 12, consuming more than 170,000 acres and destroying more than 3,500 structures. Winds moderated by Oct. 16, which enabled firefighters to make progress toward containing the 15 wildfires still active across California; more than 217,000 acres had burned, and approximately 5,700 structures had been destroyed.

As of Oct. 25, AIR said in the statement, nine wildfires were still burning in California, including the Vista Fire near Casitas Springs that erupted the previous day. The Church Fire that broke out in San Diego County on Oct. 21 was fully contained as of Oct. 24. CAL FIRE expects many of the active fires will be fully contained shortly. In total, more than 245,000 acres have burned and an estimated 8,700 structures have been destroyed. Thousands of acres have burned in Yuba, Sonoma, Napa, Lake, Mendocino, Butte, Nevada and Solano counties, which were heavily impacted by the fires.

AIR also noted in the release that multiple cities in southern California have had record-breaking temperatures during the autumn heat wave. Los Angeles exceeded the previous record of 99°F, set 108 years ago when thermometers soared to 104°F there on Tuesday, and Huntington Beach recorded 103°F despite its proximity to the ocean.

Related: California launching fire clean up ‘for the record books’

Fire conditions lessened on Thursday, AIR reported, as the high pressure system over the Great Basin began to weaken and a colder air mass spread across the northern Rockies and Plains following a cold front traveling southward.

Of the 100,000 people evacuated throughout this event, an estimated 500 remain displaced. A state of emergency was declared on Oct. 9 for the counties of Napa, Sonoma, Yuba, Butte, Lake, Mendocino, Nevada, and Orange, and an emergency proclamation for Solano County was issued on Oct. 10.

A cooling trend is forecast, along with the continued weakening of pressure across the Great Basin. Resulting offshore winds and critical fire weather are also anticipated to decrease accordingly, AIR added in the release.

Analysis from the firm shows that losses will be dominated by residential losses, with several neighbourhoods – most notably, in Sonoma County – experiencing catastrophic loss. These estimates of insured losses are based on the assumption of nearly 100% take-up rates. The fact that damage from fire, including wildfire, is included in standard homeowners’ policies in California informs that assumption, the release added.

The range in AIR’s loss estimates reflects uncertainty in the payment of additional living expenses resulting from mandatory evacuation of the city’s population, loss of some individual structures outside of the most affected neighborhoods, as well as widespread but lower levels of loss due to smoke, loss of electricity, and damage from suppression efforts. Loss estimates were derived utilizing the AIR California wildfire model and are based on exposures as of Dec. 31, 2016, the release said.

On Friday, Risk Management Solutions, Inc. (RMS) estimated the economic losses for the wildfires impacting Sonoma, Napa, Solano, Lake and Mendocino counties at between US$6 billion and US$8 billion. This range includes loss due to property damage, contents and business interruption caused by the fires to residential, commercial, and industrial lines of business, noted Kevin Van Leer, RMS’ senior product manager, in a blog post. Auto or agricultural crop losses are not included in the estimates. High penetration rates of wildfire coverage in standard homeowners and commercial policies implies similar insured losses, Van Leer suggested.

“With reports of 8,400 damaged or destroyed structures, this indicates that the proportion of properties affected equates to roughly 70 to 75 per cent, which is the highest proportion observed in the RMS review of historical events of this scale and magnitude,” Van Leer noted in the blog. “Research has shown typical percentages of affected structures ranging between 15 to 50 per cent.”

On Oct. 19, the California Department of Insurance reported that the wildfires had already cost US$1.045 billion in losses. The preliminary estimates came from data provided by eight California insurers processing claims for tens of thousands of policyholders, the state insurance department said in a statement at the time. The losses reflect commercial and residential structures, personal and commercial vehicles and agricultural equipment.

“These numbers are just the beginning of the story as one of the deadliest and costliest wildfire catastrophes in California’s history,” California Insurance Commissioner Dave Jones said. “The tragic death of 42 people and over a billion in property losses are numbers – behind these numbers are thousands of people who’ve been traumatized by unfathomable loss.”