What if the Alaskan earthquake happened in Canada?

A recent earthquake off the coast of Alaska, which prompted a brief tsunami warning for British Columbia, resulted in no immediate reports of damage — but what if it did strike Canada’s westernmost province? 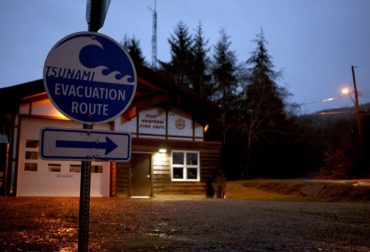 An evacuation route sign is shown in Jordan River, B.C., on Tuesday, January 23, 2018. Tsunami warning sirens went off in Tofino and other coastal communities on British Columbia’s west coast Tuesday morning after a powerful earthquake struck off Alaska. THE CANADIAN PRESS/Chad Hipolito

A 2013 study by catastrophe modelling firm AIR Worldwide, commissioned by the Insurance Bureau of Canada, estimated the overall costs for a magnitude 9.0 earthquake in B.C. at almost $75 billion. A magnitude 7.1 earthquake in eastern Canada (along the Quebec City–Montreal–Ottawa corridor), a less powerful tremor than in Alaska, would cost nearly $61 billion, IBC said in a statement Tuesday, following the Alaskan earthquake.

IBC reported that approximately 4,000 earthquakes are recorded in Canada each year. While most of them are too small to be felt, Natural Resources Canada estimates that there is a 30% chance of a significant earthquake hitting British Columbia in the next 50 years.

On Jan. 23, a magnitude 7.9 quake occurred off the coast of Alaska, 25 kilometres under water. At least three aftershocks were reported. A warning for tsunami was issued for the B.C. coast, but was later cancelled. Triggered by large earthquakes, tsunamis can generate giant waves more than 30 metres high, potentially causing massive damage.

CBC seismologist Johanna Wagstaffe was quoted as saying that if the Alaskan earthquake had struck 90 kilometres to the west, there could have been a massive tsunami.

The quake was a strike-slip earthquake, meaning that two tectonic plates slid horizontally past each other. “That means there isn’t as much vertical displacement,” she said. “So when you’re thinking of these rocks on the ocean floor, it didn’t punch up like some other earthquakes have.”

So instead of the water being displaced upward and forward, the water was moved much less by the horizontal motion. “A fortunate circumstance for anyone living along the coast,” CBC said.

2 Comments » for What if the Alaskan earthquake happened in Canada?