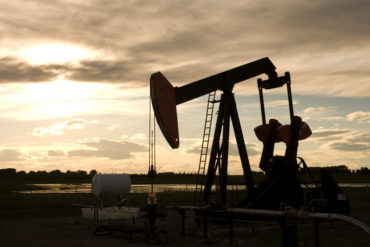 But the non-binding report sets out a series of policies options to help avoid reaching that point, including requiring the use of better technology, setting out emissions management plans and costs, and improved regulations.

Advisory group co-chair Dave Collyer said the increased emissions reporting and forecasting in the near-term will help to achieve the lower emissions-intensity goal.

“That transparency and awareness, in fact, does drive behavioural change,” Collyer said.

“So there’s a whole suite of recommendations that I characterize as more in the carrot category, to try and create the right environment to drive the behaviours.”

The penalties for industry would only kick in when industry looks to be within a year of hitting the cap. The penalties could include forcing those with higher-than-average emissions intensity to reduce them or face fines proposed at $200 a tonne of carbon. The government could also suspend projects that haven’t started construction.

Collyer said that while the plan could hit higher emitters, it’s just part of where global expectations on climate action are headed.

Wildrose Leader Brian Jean said in a statement that giving the government authority to suspend projects would further chill investment in the oil and gas sector, and is a clear cap on economic growth.

Collyer said when the cap might be reached is much debated, but there is a general sense that under business the oilsands would hit the cap by about 2030, or somewhere around four million barrels a day.

The oilsands industry currently emits about 70 megatonnes of greenhouse gases, but based on exceptions to the cap the number is closer to 60 megatonnes, Collyer said.

Those exemptions include the electricity portion of co-generation, as well as experimental and enhanced recovery operations. Upgraders that started after 2015 will be subject to a separate 10 megatonne cap.

To better understand how the industry is performing, the advisory group recommended establishing annual and 10-year forecasts on emissions.

It also suggested reviews on the system and how facilities might be affected as the oilsands hits 80, 90 and 95 megatonnes.

Alberta Environment Minister Shannon Phillips said the measures recommended by the advisory group, combined with the carbon price, look to provide enough near-term incentives – and the government is not considering adding more.

“There’s really a package of proposals here to improve our performance,” said Phillips. “So yes, the cap is a safety net, but not necessarily a relevant determination because we have done our work in advance of reaching it.”

Phillips said the government will review the non-binding recommendations and begin stakeholder consultations, with an aim to have the regulations implemented by early 2018.

Berman, who was a controversial appointment because of her strong views against the oilsands, is leaving the advisory group along with several other members as it transitions to a different phase.