Laws that shield quasi-judicial decision makers and public inquiry officials from personal damages claims are meant to protect their impartiality, a Supreme Court of Canada judge suggested in a ruling released Friday. 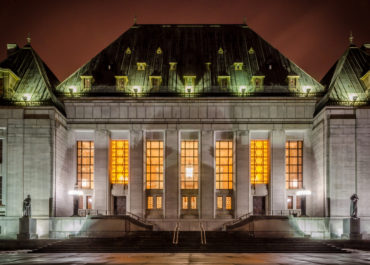 Jessica Ernst sought a remedy of $50,000 from Alberta’s Energy Resources Conservation Board. Ernst, who owns land near Rosebud, Alberta, alleged that the board violated her constitutional rights.

Originally, Ernst had sued EnCana in connection with hydraulic fracturing in the area. She later sued the Energy Resources Conservation Board alleging “negligent administration of a regulatory regime” related to her claims against EnCana. The allegations were not proven in court.

Section 24 (1) of the Charter of Rights and Freedoms stipulates that anyone whose rights or freedoms, “have been infringed or denied may apply to a court of competent jurisdiction to obtain such remedy as the court considers appropriate and just in the circumstances.”

But Section 43 of the Energy Resources Conservation Act stipulates that “no action or proceeding may be brought” against either the board itself or a board member “in respect of any act or thing done purportedly in pursuance” of any act or regulation that the board administers or any decision, order or direction of the board.

That board “licenses gas wells and enforces legislative and regulatory provisions that are intended to protect the groundwater supply from interference or contamination due to oil and gas development,” noted Madam Justice Rosalie Silberman Abella of the Supreme Court of Canada. Justice Abella added the board also “has detailed procedures for receiving and investigating public complaints, conducting compliance inspections, and taking appropriate enforcement and remedial action when necessary.”

Justice Abella made her comments in reasons concurring with a divided ruling against Ernst.

Court records indicate Ernst was told that the Energy Resources Conservation Board “took a decision in 2005 to discontinue further discussion” with her but then in March, 2007 she was  “again free to communicate with any staff at the Board.”

She “claimed that because of her public criticisms, and because of a reference she made to Weibo Ludwig (who was convicted for carrying out bombings and other destructive acts against oil industry installations in Alberta), the Board prohibited her from communicating with it,” Justice Abella wrote in the Supreme Court of Canada decision released Jan. 13, 2017. “As a result, Ms. Ernst claimed she was unable to properly register her concerns that EnCana was adversely impacting the Rosebud Aquifer and her groundwater supply.”

Ernst filed a statement of claim in December, 2007. That claim was amended in April, 2011 and amended again in February, 2012. She claimed her Charter right to free expression was violated and sought remedy of $50,000.

The board argued that the immunity provision in the Energy Resources Conservation Act bars both negligence and charter claims. A case management judge with the Alberta Court of Queen’s Bench agreed. This ruling was upheld on appeal in 2014.

Ernst was unsuccessful in her appeal to the Supreme Court of Canada.

“Immunity clauses protecting judicial and quasi-judicial bodies” are found in several statutes across Canada, Justice Abella noted. For example, in Alberta, the Provincial Court Act gives immunity to mediators while in B.C., the Labour Relations Code provides “immunity for mediators and the industrial inquiry commission.”

Giving adjudicators immunity “from personal damages claims is grounded in attempts to protect their independence and impartiality, and to facilitate the proper and efficient administration of justice,” Justice Abella wrote.

Case history includes a 2010 ruling by the Supreme Court of Canada in favour of Alan Ward, who had been arrested in 2002, by Vancouver city police, for breach of the peace. The police suspected at the time that Ward was intending to throw a pie at Jean Chretien, then Canada’s prime minister, who was at a ceremony marking the opening of a gate to Chinatown.

In the police lockup,  corrections officers instructed Ward to remove his clothes in preparation for a strip search.

“Ward held that Charter damages will not be an appropriate and just remedy where there is an effective alternative remedy or where damages would be contrary to the demands of good governance,” Mr. Justice Thomas Cromwell wrote, in Ernst, on behalf of himself, Madam Justice Andromache Karakatsanis, Mr. Justice Richard Wagner and Mr. Justice Clément Gascon. “These considerations, taken together, support the conclusion that the proper balance would be struck by holding that damages are not an appropriate remedy.”

They added that the board “had the public duty of balancing several potentially competing rights, interests and objectives.”

So allowing claimants to bring claims for damages could “result in defensive actions by the Board, which would ‘chill’ its ability to otherwise carry out its statutory duties effectively and in the public interest.”

Justice Abella cited the 2015 Supreme Court of Canada ruling in favour of Ivan Henry, who spent 27 years in jail after being convicted in 1983 of 10 sexual offences. Those convictions were quashed in 2010. Henry filed a lawsuit. One of the defendants was the Attorney General of British Columbia. Henry alleged the province failed to follow its disclosure requirements.

The B.C. Court of Appeal ruled that Henry “was not entitled to seek Charter damages for the non-malicious acts and omissions of Crown counsel.” That ruling was overturned on appeal.

The Supreme Court of Canada ruled that Henry can amend his pleadings to include a claim for Charter damages and allege that the Crown “caused him harm by intentionally withholding information when it knew, or should reasonably have known,” that the information was material to his defence.

“Given the policy concerns associated with exposing prosecutors to civil liability, it is necessary that the liability threshold be set near the high end of the blameworthiness spectrum,” Justice Michael Moldaver wrote for the majority in Henry. ” A duty of care paradigm risks opening up a Pandora’s box of potential liability theories. For example, if prosecutors were subject to a duty of care, a claimant could allege that they failed to probe the police forcefully enough to ensure that relevant information was not being suppressed. Such an approach would effectively impose an obligation on prosecutors to ‘police’ the police.”

The Supreme Court of Canada “has found Charter damages to be available on only two occasions: in response to a Charter breach resulting from abusive police conduct towards a detained suspect (Ward), and in response to a Charter breach resulting from a prosecutor’s inadequate evidentiary disclosure to a criminal accused (Henry v. British Columbia (Attorney General),” Justice Abella wrote in Ernst.  “Charter damages have never been awarded against independent judicial or quasi-judicial decision-makers. This does not mean that such damages are beyond reach, but they are tied to the question of the constitutionality of immunity clauses and the extent to which they should be read down.”

Dissenting were Justice Moldaver, Chief Justice Beverley McLachlin, Mr. Justice Michael Brown and Madam Justice Suzanne Cote. They ruled that the issue was  “whether it is plain and obvious that the wrong pleaded – i.e., acts intended to punish Ms. Ernst – would always and inevitably fall within the s. 43 bar to litigation.”

The dissenting judges added the question was whether “punitive conduct is clearly caught by the phrase, ‘any act or thing done purportedly in pursuance of’ the ERCA or other legislation administered by the Board, or any regulation, or any “decision, order or direction'” they added. “If it is ultimately established that the actions of which Ms. Ernst complains were, in fact, ‘purportedly in pursuance’ of the ERCA, other legislation or regulation, or a Board decision, order or direction, the immunity clause will bar her claim unless s. 43 is unconstitutional. In our view, those issues remain to be determined on a fuller record.”