The Alberta Motor Association Insurance Company (AMA) has announced that it has filed a statement of claim with the Court of Queen’s Bench of Alberta to take “legal action to recover money owed to it by a number of companies who provided reinsurance coverage for the Fort McMurray wildfires.” 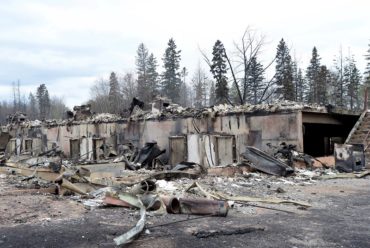 FILE – A burned out structure is shown in the Abasands neighbourhood during a media tour of the fire-damaged city of Fort McMurray, Alta. in a May 9, 2016, file photo. Severe weather events such as fires and floods are becoming more frequent and more difficult to predict, and it’s forcing architects and engineers to rethink how they design buildings, infrastructure and cities.THE CANADIAN PRESS/Jonathan Hayward, File

AMA said in a press release earlier this week that “this is simply a commercial dispute, which is not uncommon in business. The issue is a matter of interpretation of a contract. We have interpreted the contract differently than the reinsurers.”

While the association has been paid $200 million in reinsurance, there is currently $165 million owed to AMA by reinsurers as a result of a contractual dispute and AMA is seeking a summary judgement, the release noted. A summary judgement allows the court to dispose of a civil case without a full trial if it believes the case qualifies, which “depends on the evidence providing enough information to fairly and justly adjudicate the dispute.”

“Based on legal opinions from a number of independent experts, we are confident we will recover the money we are owed,” the release said, adding that “regardless of the outcome, our organization is strong financially.”

AMA said in the release that the legal action will not affect its policyholders, employees or members. The association has settled more than 90% of its claims in Fort McMurray and has secured reinsurance to meet its needs going forward. None of the reinsurers on the 2017/2018 treaty are involved in this legal dispute, the release said, adding that reinsurance is a common practice used by insurance companies to lower their risk in case of a catastrophic event. The AMA spreads parts of its coverage to other insurance companies (reinsurers) to lessen its exposure to large events.

The 2016 wildfire in Fort McMurray was the costliest natural disaster in Canadian history at nearly $4 billion in insured losses.

AMA is among the largest membership organizations in Alberta, representing more than 984,000 members. As an advocate for traffic safety, travel and consumer protection and crime prevention, AMA represents the interests of its members to industry and all levels of government.