EDMONTON – Alberta is looking at building a new operations centre to better manage how it responds to disasters such as the Fort McMurray wildfire. 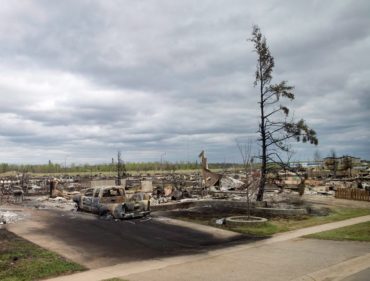 Damage from the wildfires is seen in the Beacon Hill neighbourhood in Fort McMurray, Alta., on Monday, May 9, 2016. THE CANADIAN PRESS/Ryan Remiorz

Municipal Affairs Minister Shaye Anderson said the need for a larger and more modern nerve centre is one of the lessons learned from the fire last May that forced more than 80,000 people to flee the area and destroyed 2,400 homes and buildings.

Anderson told a Conference Board of Canada meeting on how communities can be more resilient to natural disasters that government staff did an excellent job, but more preparation is needed for future disasters.

“We realize that we need a bigger, newer provincial operations centre – something with more technology that is up to date and up to speed with what is going on with the world right now,” Anderson said Tuesday. “We are set on a path for that.

“We always need to be prepared in the future if something happens that is even bigger.”

Anderson said the government is expecting a report evaluating how it responded to the wildfire to be released next month. The KPMG report is expected to include recommendations on how the government should update its disaster planning.

Shane Schreiber, managing director of Alberta Emergency Management Agency, told the conference that communities need to do more to prepare for disasters before they happen.

That includes training staff, developing flexible plans and building relationships with key people in other organizations before something challenging happens.

Schreiber said legislation and regulations cannot replace a corporate culture of co-operation in an emergency.

He said people have to prepare for the unthinkable, such as evacuating a major city such as Fort McMurray. Officials must be prepared to make quick decisions based on who they know can do a task rather than waiting for lawyers to sign off on an order, Schreiber added.

“In an emergency, you have to have strong networks so you can move at the speed of trust,” he said. “What is the cost of not trusting people? Just let her burn.”

Pedro Antunes, deputy chief economist of the conference board, said it will likely take Alberta four or five years to bounce back from the economic effects of the wildfire.

He cited $3.7 billion in personal and commercial property claims, infrastructure damage, the cost of fighting the fire and the loss last year of 47 million barrels of oil production.

Antunes said spending on rebuilding efforts this year will help bolster economic growth in Alberta by 2.8 per cent, but the spending will then start to taper offer.

“It will take four or five years to rebuild the assets back to where they were – be it infrastructure, be it residential properties, be it businesses.”

The conference board said natural disasters such as wildfires, flooding and extreme weather are on the rise in Canada and are testing the limits of infrastructure.

The board says all levels of governments need to face up to these challenges.