FORT MCMURRAY, Alta. – The Alberta government is taking a second look at its plan to allow people to return home to Fort McMurray after explosions damaged some homes in the city and a raging wildfire spread north toward oilsands plants. 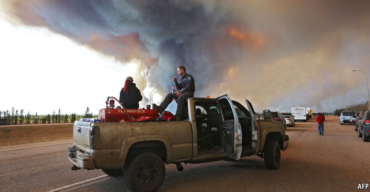 The fire overnight destroyed a 665-room work camp north of the city and two other camps are threatened by the flames.

“The government of Alberta has been discussing a re-entry plan with the Regional Municipality of Wood Buffalo,” Premier Rachel Notley said Tuesday. “Obviously, yesterday’s events have caused us to take a second look at those plans. Safety will be and must be our first and principle priority.

“I hope to have more to say about our specific re-entry plans within the week.”

Notley added the explosions are examples of things that can happen when a city the size of Fort McMurray is being brought back online.

“When you start turning on a switch … in a city of 90,000 people, sometimes stuff happens,” she said. “What those two incidents last night demonstrated to us is that’s the right way to go, that we need to make sure we’ve got everything cued up before people come back in because we want to make sure it’s safe.”

In recent days, oilsands workers were moved back up north to begin ramping up oilsands production again. But late Monday about 8,000 people working at camps north of Fort McMurray were ordered out in a mandatory evacuation due to the fast-moving fire.

The evacuation zone, stretching about 50 kilometres north of Fort McMurray to just south of Fort MacKay, included Syncrude and Suncor facilities, along with several smaller operations.

Notley said the focus of firefighting efforts Tuesday would be protecting other work camps.

“We expect fire growth in the area of many of these camps today,” she said.

“Weather conditions will make this work extremely challenging. Westerly winds will push the fire closer to Suncor and Syncrude, but we expect very high resiliency with both of those facilities.”

The wildfire has grown to about 3,550 square kilometres.

The entire population of Fort McMurray, more than 80,000 residents, are now entering their third week away from home after a wildfire spread into the oilsands city on May 3.

About 2,400 structures were destroyed, but essential infrastructure, including the hospital, water treatment plant and the airport, remain intact.

Suncor said in news release that it had “started a staged and orderly shutdown of our base plant operations” and that personnel were being transported to work camps further north.

It stressed there has been no damage to Suncor infrastructure.

“Suncor has enhanced fire mitigation and protection around all of its facilities,” said the release. “When it is safe to do so, we will continue implementing our restart plans.”

High winds have spurred the quickly spreading wildfire as tinder-dry conditions persist in the region.

A massive line of Dozers and excavators prepare to build a fire guard around the Enbridge Tank Farm in Fort McMurray pic.twitter.com/8Pfi1wxZoq

Taken from my buddy's FB timeline, this is the Black Sands camp. Praying all are ok. #ymmfire #ymm pic.twitter.com/4eeiino3Gp

Here's where Blacksand lodge is located.
Interactive maps of camps on our site:https://t.co/E2sJHpBMGU #ymmfire pic.twitter.com/xPfD3r0Ckc

'For this to happen out of nowhere … we just don't feel safe at all,' says woman who escaped #YMMFire twice. https://t.co/ic2vGkPYNp

Fire held off Village site. No structural damage but still considered @ risk. Crews to stay tonight to keep it under control #ymmfire