Notley said Tuesday she has already asked that the subject be added to the agenda for July’s premiers meeting in Whitehorse, Yukon. 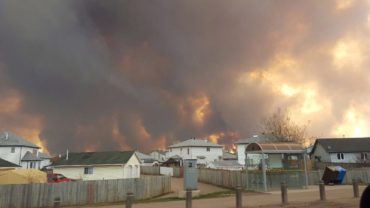 A wall of fire rages outside of Fort McMurray, Alta. Tuesday May 3, 2016. Raging forest fires whipped up by shifting winds sliced through the middle of the remote oilsands hub city of Fort McMurray, sending tens of thousands fleeing in both directions and prompting the evacuation of the entire city. THE CANADIAN PRESS/ Mary Anne Sexsmith-Segato

“We’re not the first jurisdiction that’s been struggling with this problem. It’s happening all over the country, which is one of the reasons why we’re wanting to look at a broader conversation, because we’re frankly not the only province with a lot of boreal forest,” Notley said.

“We have a federal disaster relief program but we also need to look at whether there’s the opportunity for potentially more federal support on mitigation efforts.”

Notley said the forest is dense, summers are getting longer and sometimes hotter and Canadian politicians need to have “broader conversations” about the issue.

The premier said her government is reviewing recommendations from earlier reports such as the one after the 2011 fire in Slave Lake, Alta.

The blaze, which started 15 kilometres outside of town was quickly pushed by 100 km/h winds past fire barriers designed to protect the community. It forced out Slave Lake’s entire population of 7,000 and destroyed roughly one-third of the community.

A review committee set up after the fire warned that “aging coniferous forests dominate more of the landscape” and are more flammable than they were 50 years ago. 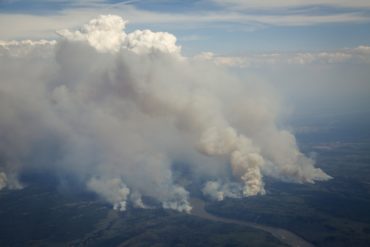 Wildfires continued burning in and around Fort McMurray, Alta., Wednesday, May 4, 2016.THE CANADIAN PRESS/Jeff McIntosh

“The risk of wildfires and the threat they pose to lives, homes, communities and industry is increasing,” the review concluded.

The committee’s first recommendation was that more action be taken to remove fuel sources on the outskirts of communities because of the “rapidly increasing number and severity of wildfires.”

“I think that certainly what Slave Lake talked about was wider protections around communities, but really Fort McMurray had already engaged in a lot of those strategies,” Notley said.

“The bigger issue we were struck with in Fort McMurray really was the issue of El Nino, the dryness of the forest, the nature of the fuel and the extreme heat and wind that happened early in the season.

“We will have to look at that and look at if there’s things we can do to avoid that particular scenario again.”