Alberta’s new government: What next for the auto rate cap?

As the newly-elected United Conservative Party (UCP) prepares to take power in Alberta, it remains an open question what the victory will mean for the province’s auto insurance companies and brokers.

In his electoral victory speech, UCP Leader Jason Kenney proclaimed that “Alberta is open for business,” alluding to the “lowest taxes in Canada,” and “a government that will cut its red tape burden by at least one third.” 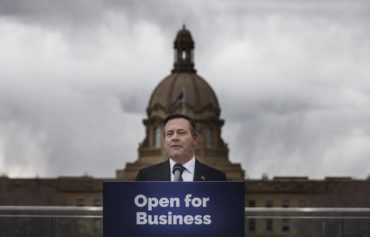 Premier-Designate Jason Kenney addresses the media the day his after his election victory in Edmonton on Wednesday April 17, 2019. THE CANADIAN PRESS/Jason Franson

But how all of this will play out in the insurance sector remains a mystery.

None of the UCP’s nine major campaign promises refer to the auto insurance file, instead making pledges on issues such as taxes, the environment, energy, education, health care, employment, crime and infrastructure. But certainly, the province’s insurers and brokers have made it known to all that auto insurance in the province is a live issue.

The day after the election, Insurance Bureau of Canada (IBC) congratulated the new government and put auto insurance first thing on the agenda.

“Alberta consumers are facing significant issues with auto insurance,” IBC said in a statement congratulating the new government. “Local brokers and agents are also feeling the impacts of the issues in the system and this is affecting communities across the province.”

In a short statement today, the Insurance Brokers Association of Alberta (IBAA) said it is “looking forward to working with the new government to continue to make property and casualty insurance accessible and affordable in Alberta.”

The profitability of Alberta’s auto insurance business is of prime concern to the P&C industry. Alberta’s previous NDP government issued an order in December 2017 capping cumulative auto rate hikes at no more than 5%. The government cited concerns about the effect of hefty auto insurance rate increases on Albertans.

However, the cap meant insurers could not raise rates to keep pace with escalating auto claims costs. Alberta’s superintendent of insurance last year completed a request for proposal that would see an independent contractor conduct a claims costs study using information collected from the P&C industry. The Claims and Costs Study is expected to be completed by the end of December 2019.

During the province’s 2019 election, held on Apr. 16, the province’s insurance brokers initiated a letter campaign to let political candidates know about the issues arising from the 5% cap on rate hikes – including the negative impact of the cap on consumers.

“Access to auto insurance in Alberta is in crisis,” says a generic letter template provided for brokers to fill out and send to their electoral candidates. The template is posted on the IBAA website. “The government’s current 5% cap on premium increases for auto insurance premiums means that insurance carriers are unable to cover increasing claims costs both for physical damage and for escalating injury claims.”

The letter goes on to cite four different ways the cap is affecting consumers:

4 Comments » for Alberta’s new government: What next for the auto rate cap?