EDMONTON – Alberta Premier Rachel Notley says she told an environmental review panel on the Trans Mountain Pipeline that her province is doing its bit to control greenhouse gas emissions. 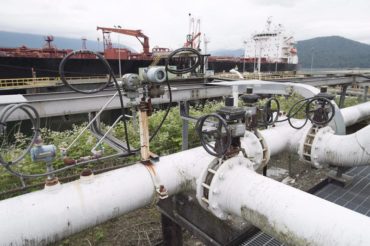 A ship receives its’ load of oil from the Kinder Morgan Trans Mountain Expansion Project’s Westeridge loading dock in Burnaby, B.C., in this June 4, 2015, file photo. The National Energy Board has recommended that the federal government approve the contentious $6.8-billion Trans Mountain pipeline expansion with 157 conditions. THE CANADIAN PRESS/Jonathan Hayward

Notley says she told the three-member panel that Alberta’s climate plan will cap oilsands emissions to 100 megatonnes and phase out coal-fired electricity by 2030.

“Alberta has done its own homework and is on it,” Notley told reporters at the legislature Thursday, after meeting with the panel earlier in the day.

“This particular pipeline application ought to be considered on the basis of its individual merits, not as a symbol for this much larger issue (of greenhouse gas emissions in Alberta).”

Texas-based energy infrastructure giant Kinder Morgan is seeking federal approval to expand the existing Trans Mountain line in order to triple the capacity of diluted bitumen travelling from Alberta’s oilsands to Burnaby B.C. The move would tanker traffic on the West Coast by about seven-fold.

The project has faced heated opposition from environmentalists, politicians, and indigenous groups in British Columbia worried about the environmental impacts of any spills.

It has been a long and complicated legal process.

The federal regulator, the National Energy Board, OK’d the project last month after two years of hearings and research, saying the ultimate benefit to Canadians outweighs the potential problems.

That decision is to come in December, but in the meantime, the federal government has struck the three-member review panel to further assess the environmental risks and to ensure that indigenous groups and others affected by the line have been consulted.

The three-member panel can’t overrule the energy board’s decision but its comments will be used by Trudeau’s government in making its final decision.

Notley’s government has been lobbying hard for pipelines to gain more access to ports to get Alberta’s oil to distant markets to fetch a better price.

Alberta’s bottom line and put its budgets deeply in the red.

The National Energy Board decision in May was a big hurdle to clear for Kinder Morgan, but that decision now faces legal challenges.

The City of Vancouver along with environmental groups and a B.C. First Nation are asking for a federal review of the decision, saying the energy board did not fully consult and did not properly assess all the environmental impacts.