Allstate estimates gross cat losses of US$576 for Hurricane Harvey 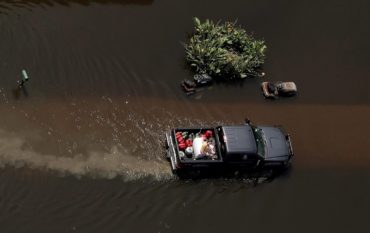 A pickup drives through flood water in the aftermath of Hurricane Harvey Friday, Sept. 1, 2017, on a rural rald near Galveston, Texas. (AP Photo/Charlie Riedel)

The losses will be reduced by US$23 million in anticipated reinsurance recoveries, for a net estimated loss of US$553 million, Northbrook, Ill.-based Allstate said in a press release on Thursday.

Estimated losses for Harvey include approximately 55% related to auto coverages. “We incurred estimated losses and expenses of US$53 million not covered by our reinsurance related to commercial insurance, auto protection contracts and loss adjusting expenses in excess of our reinsurance allowances,” the release said. “Given the complexity of this event, we may experience a higher level of uncertainty in our estimates due to the inability of our customers to gain access to their homes and autos and submit claims.”

Other insurers have released estimated losses from Harvey. Travelers reported on Sept. 9 that it estimates cat losses, including estimated recoveries from reinsurance, will be in the range of US$375-750 million before tax, or US$245-490 million after tax. Munich Re said in a statement on Sept. 13 that Harvey and Hurricane Irma “are expected to result in high insured losses, which the market and Munich Re are unable to quantify at the moment.” The losses from both hurricanes could mean that Munich Re might miss its profit guidance of [2.0-2.4 billion euros] for the year – depending on how the business performs until the end of 2017,” the company said, adding that “the figures for the third quarter of 2017 will probably show a loss.”

On Sept. 15, the Insurance Council of Texas (ICT) placed the insured losses from Harvey at US$19 billion. Insured windstorm and other storm-related property losses are expected to top US$3 billion, ICT said in a press release at the time. In addition to the property losses, an estimated 250,000 private passenger and commercial vehicles were flooded, “resulting in insured losses from both auto losses and commercial property which are expected to reach US$4.75 billion,” the council said in the release. These totals do not include residential property losses due to flooding or any uninsured losses.

Harvey made landfall in Texas on Friday, Aug. 25. On Thursday, the Associated Press reported that Harvey flooded “a vast area stretching from Houston to the Louisiana border. The storm caused 70-plus deaths and damaged or destroyed more than 250,000 homes and hundreds of thousands of automobiles.”

More News
Related
Estimated insured losses for U.S., Caribbean from Hurricane Matthew US$2.5 billion to US$8 billion: RMS
Economical Insurance posts net income of $5.3 million in 2017 Q1, down from $28.5 million in prior-year quarter
Insured losses from Hurricane Hermine will likely not exceed US$400 million: RMS
Economical reports 12.8% increase in gross written premiums in Q2 2017, 8.3 point increase in combined ratio to 112.8%