The Allstate Corp. announced July 20 it estimates its catastrophe losses for the three months ending June 30 will be $993 million, pre-tax, of which $310 million is from 17 events in June alone. 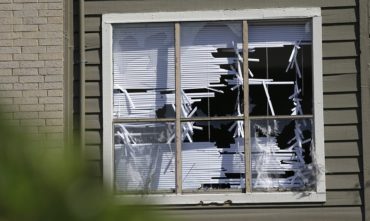 Blinds are shredded in windows broken by a hail storm Thursday, March 24, 2016, in Plano, Texas. An early spring hailstorm in North Texas has broken windows in some homes and vehicles. (AP Photo/LM Otero)

Northbrook, Ill.-based Allstate reported in August, 2016 that its catastrophe losses for Q2 2016 were $961 million. All figures are in United States dollars.

This could include man-made events – such as terrorism or industrial accidents – as well as natural catastrophes.

More than a third of its Q1 2017 catastrophe losses were from a severe hail event, “primarily affecting the state of Texas in March,” Allstate said earlier.

In a separate report, Aon plc’s Impact Forecasting unit noted there was severe weather March 26 to 28, in which “softball-sized hail left homes, vehicles, and business with shattered windows and dented roofs.”

That event left “extensive damage,” with the hardest hit area including Texas, Oklahoma and Kansas, Impact Forecasting said at the time.

Allstate announced Nov. 28, 2016 that it agreed to acquire San Francisco-based SquareTrade, which writes protection – from malfunctions and accidental damage – for consumer electronics. Allstate agreed to pay $1.4 billion to a group of shareholders – including Bain Capital Private Equity and Bain Capital Ventures – for Squaretrade, which has relationships with Amazon, Costco, Sam’s Club, Target, Staples, Office Depot and Toys R Us, among other retailers.

During the three months ending March 31, 2017, Allstate reported $59 million in premiums from Squaretrade. Allstate recorded consolidated revenue in Q1 of $9.43 billion, of which $7.959 billion was from property and liability insurance premiums. Of that $5.38 billion was from auto.