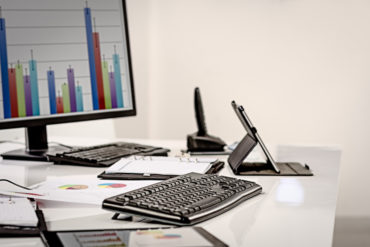 For the first nine months of the year, consolidated revenues were up 1.1% to US$27.3 billion from US$27 billion in 9M 2015, Northbrook, Ill.-based Allstate said in a statement on Wednesday.

Allstate brand auto written premium growth of 4.1% in the third quarter of 2016 reflected a 7.7% increase in average premium, which more than offset a 2.5% decline in policies in force, the statement said. The recorded combined ratio of 99% in the third quarter of 2016 was 0.2 points higher than the prior-year quarter and was adversely impacted by 3.1 points of catastrophe losses.

Esurance NWP growth of 5.4% compared to the prior-year quarter reflects a slight decline in policies in force, which was more than offset by a 6.4% increase in auto average premium. The recorded combined ratio of 109.8% was 3.3 points higher in the third quarter of 2016, primarily driven by higher catastrophe losses. 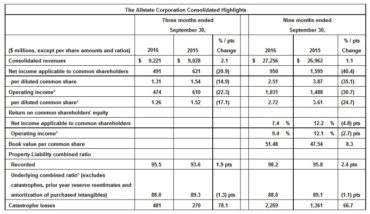 “Catastrophe losses increased by US$211 million (78%) in the third quarter and US$908 million (67%) for the first three quarters, which led to a US$457 million decline in year-to-date operating income versus 2015,” Wilson said. “The property-liability underlying combined ratio of 88.0 for the first three quarters was at the favourable end of our annual outlook range of 88 – 90.”

“Results on our five operating priorities for 2016 also reflect a balanced approach to adapting to the external environment,” Wilson concluded.

The Allstate Corporation is the largest publicly held personal lines insurer in the United States, providing coverage to approximately 16 million households through auto, home, life and other insurance.