Another flood recovery centre to open in Saskatchewan

Nearly one week after a Provincial Disaster Assistance Program (PDAP) flood recovery centre opened in Estevan, Sask., the Ministry of Government Relations said that another centre will open in the Town of Watrous. 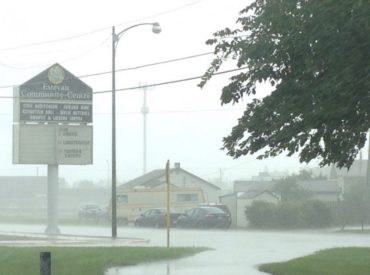 A flood recovery centre will open in the Saskatchewan town of Watrous. Photo: @CTVGareth.

The centre will open to provide support and advice to residents of the community and the rural municipality of Morris that have been affected by recent severe weather and flooding, the ministry said in a statement on Wednesday.

The centre will be staffed with PDAP officials who can begin the claims process as well as answer any questions residents may have about the program.

On July 14, the government opened a temporary flood recovery centre in Estevan to provide immediate support and advice to residents affected by recent severe weather and flooding. On July 15, the government of Saskatchewan announced that another flood recovery centre would open July 17 to 19 in the Town of Arborfield to provide support to residents of the rural municipalities of Moose Range and Arborfield and the Town of Carrot River. A provincial building official was also available to answer questions related to structural safety and building concerns.

On July 11, the Canadian Press reported that a state of emergency had been declared in Estevan after the southeastern Saskatchewan city was hit by at least 130 millimetres of rain in just over two hours. Environment Canada said that more heavy rain – possibly as much as 100 mm – was expected over parts of southern Saskatchewan over the next three days.

SGI Canada has also reported that it will be assigning additional adjusters to Estevan, among other areas hit by heavy rainfall that prompted localized flash flooding, to handle anticipated higher-than-normal claim volumes.

Even our summer student is helping hand out flood relief kits in #Estevan pic.twitter.com/59U8EqzJl4

Special weather statement remains in effect for SC & area with potential rainfall of 100mm by Wed. Flood in Estevan. pic.twitter.com/HdU41vIhhX