When commercial trucks are used in protests, some insurance professionals suggest their equipment may no longer be covered.

The question has been raised while the ongoing ‘Freedom Convoy’ in Ottawa stretches into its second week. Protestors demanding an end to government vaccine mandates are continuing to occupy the capital using their commercial — and even personal — vehicles as a conduit for action.

One tweet, in which the poster self-identified as a former underwriter and adjuster, started a public Twitter discussion. The poster argued that commercial trucks will have no coverage if an incident occurs. “By partaking in an illegal occupation protest, [do] police understand that all those commercial vehicles are violating the terms of their liability insurance? Insurance carriers can deny claims/essentially jump off risk,” the tweet reads.

However, simply being parked in Ottawa without causing damage doesn’t automatically exclude all vehicles from coverage, one insurance professional says.

“Just the fact that somebody drove [their trucks] to Ottawa and peacefully parked them in an orderly way, that in itself, I don’t think, takes it outside of coverage,” says Bernard McNulty, chief agent and head of claims in Canada at Allianz Global Corporate & Specialty.

But the longer truckers are involved in acts of “civil commotion,” the less likely they will be covered, he adds. “I think the more different terms get used as to [describe] what’s going on, the more likely one of those terms is going to fit into the exclusionary language in the auto policy.”

“We only have one auto policy in Ontario, so all the insurers use the [OAP-1]. You really have to rely on the language of that policy,” he says. OAP-1 section 1.8.5, for example, uses the term “insurrection” in its exclusionary language.

Ottawa’s mayor Jim Watson has declared a state of emergency and called the protest an “insurrection.” The Ottawa police service have called it a “demonstration.” Media outlets, namely the Globe and Mail, National Post and New York Times, have referred to it as an occupation. Other terms being used include “peaceful” protest, civil commotion and/or disobedience.

“Now that the mayor has used the term ‘insurrection,’ I think that becomes problematic for a truck owner-operator when it comes to coverage,” McNulty says.

One broker says insurers might be able to exclude this type of coverage if they can prove there was a material change in risk from what they originally insured the policyholder for.

“It would be hard for an insurer to deny these kinds of losses, but if they were to take an angle [to exclude coverage], it would be for a material change in risk, because they never originally insured the vehicle to be used for this purpose,” says Bryan Yetman, president at First Durham Insurance. “They would have insured the vehicle to be used as a truck moving goods and whatnot across town. But…I think that would be a hard avenue to take.” 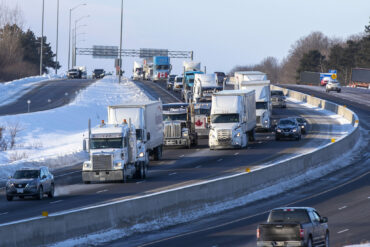 Trucks from the “Freedom” convoy travel on Highway 401 headed eastbound in Kingston, Ont., headed for Ottawa, on Friday Jan. 28, 2022. THE CANADIAN PRESS/Lars Hagberg

A website has been created to document truckers and other commercial businesses involved in the protest. McNulty weighs in on whether insurers could use photos to jump off liability.

“I think the next time that policy might be up for renewal, the broker and the insurer might be taking a hard look at what ‘does the owner operator do with this truck?’ And if that particular insurer…were using a database of photos, they might have a hard time having one of those truckers as a client,” he says.

“[If] an insurance company realized one of their clients was parked in the middle of Rideau Street in Ottawa as part of the protest, I believe they would be in a position to get off risk for material change. But again, there’s a registered letter process that they have to undergo to do that,” Yetman says.

One Ontarian trucking company, Wellington Motor Freight, allowed employees to join the convoy on the condition that they would not be authorized to use company equipment.

“Due to insurance concerns we would not allow company-branded equipment to participate in the convoy as the usage would be outside of the scope of our policy use. Wellington Group of Companies will not block individuals from using their personal vehicles and participating in the convoy should they wish as we support freedom of speech in a respectful and peaceful delivery,” CEO Derek Koza told Today’s Trucking.

Employees were set to report back to work on Jan. 31. “We told the drivers that they are free to join the convoy in their personal vehicles should they wish, however our assets are needed in order to support our customers and keep the supply chain moving,” Koza said.