“We had an excellent start to 2017,” said J. Patrick Gallagher, Jr., chairman, president and CEO of AJG, in a statement. “Coming off a terrific 2016, we delivered solid organic growth, outstanding revenue growth from our tuck-in M&A strategy and strong margin expansion in the first quarter. Our global businesses are working well together, the team is energized and we are successfully executing our strategies. We are well positioned for the remainder of 2017.” 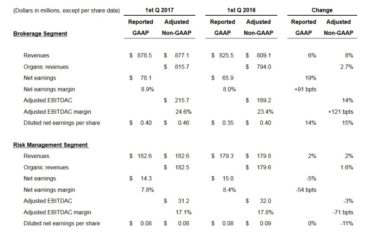 AJG is an international brokerage and risk management services firm, with operations in 33 countries, including Canada.