Relentless seasonal flooding that began in mid-June resulted in continued fatalities and damage across parts of Asia in July, causing an estimated US$11 billion in economic losses, according to Impact Forecasting’s latest Global Catastrophe Recap report. 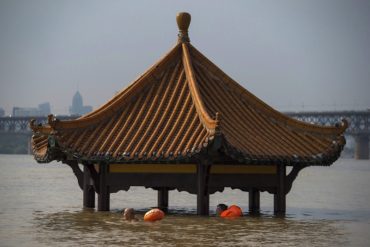 People swim past the top of a pagoda at a flooded riverside park in Wuhan in central China’s Hubei Province on Monday, July 3, 2017. Dozens have been killed and more are missing as heavy rains pummeled southern China, flooding towns, cutting off power and halting traffic, China’s Ministry of Civil Affairs said Tuesday. (Chinatopix Via AP)

Impact Forecasting noted in a statement from Aon plc that the greatest flooding impacts in Asia were recorded in China, where the Ministry of Civil Affairs listed combined economic flood damage at more than US$10 billion during a six-week stretch, much of which occurred in the Yangtze River Basin. Nearly 200 people were left dead or missing and hundreds of thousands of homes were damaged or destroyed.

Heavy flooding also occurred in Japan following the landfall of Tropical Storm Nanmadol and “abundant remnant moisture associated with a frontal boundary,” with more than 2,600 homes and other structures damaged or destroyed as extensive flooding and landslides affected Fukuoka, Oita, Shimane, Kumamoto and Hiroshima prefectures, the statement said. Total economic losses were expected to near US$1 billion.

In Canada, intense heat and gusty winds led to hundreds of wildfires and “numerous reports of damage” in British Columbia, where a state of emergency was declared. “Officials reported that 240 wildfires were at one point active in July that prompted the evacuation of more than 14,000 residents,” Impact Forecasting said in the report. “Among the worst affected areas was between the village of Cache Creek and the community of Ashcroft, where five homes, 30 trailer park homes (Boston Flats) and two airport hangars were destroyed. The British Columbia government announced that it had allocated CAD100 million (USD78 million) to help areas rebuild.”

In Alberta, up to tennis ball-sized hail fell on July 23, accompanied by strong winds and heavy rain, the report noted. The first round of storms hit the communities of Red Deer, Innisfail and Wetaskiwin, while the second round impacted an area from Edmonton to Red Deer. Isolated storms were also reported around Calgary. Hail caused extensive damage to vehicles, houses, crops and other property, while high winds downed multiple trees and power poles, tore shingles off roofs and toppled grain bins. Localized flooding was also reported around Red Deer, the report said. Impact Forecasting estimated the economic loss at US$50+ million.

Later in the month, an advancing cold front spawned a series of severe thunderstorms across parts of Alberta and Saskatchewan from July 27 to 29. Some of the most notable damage resulted from large hail and damaging winds throughout the metro Edmonton region. Total economic and insured losses were expected “well into the millions (USD),” the report said.

“There was no shortage of global natural disasters during July, though the vast majority were reported in Asia, where enhanced seasonal monsoon rainfall over China and throughout South Asia led to significant flooding that caused considerable loss of life, and billions of dollars of damage to property and agriculture,” said Claire Darbinyan, Impact Forecasting’s associate director and meteorologist, in the statement. “In addition, three tropical cyclones in the region enhanced the monsoonal flow to trigger further flooding in multiple countries. Given low levels of insurance penetration in the region, the majority of these losses are expected to be uninsured, highlighting the considerable protection gap and the potential for re/insurers to further offer their specialist risk management skills,” she concluded.

More News
Related
May storms in Ontario, Quebec and the Maritimes caused hundreds of millions in damage and damaged more than 5,200 homes: Aon Benfield
Saskatoon thunderstorm estimated to cost over US$30 million, floods and convective storms cost global economy US$5 billion in June: Aon Benfield
Hurricane Harvey likely to be one of the costliest natural disasters on record for U.S. economy: Aon Benfield
Flooding in Ontario and Quebec in April and May estimated to cost “well into the millions” in U.S. dollars: Aon Benfield