CALGARY – Alberta oilsands workers forced to flee the ferocious Fort McMurray wildfire are returning to begin the tricky process of restarting their projects in northern Alberta, reassured by colder weather and a forecast of rain. 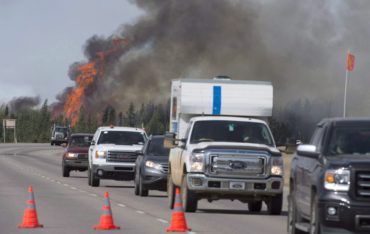 Evacuees drive past a fireball as a wildfire rips through the forest beside Highway 63, some 16 kilometres south of Fort McMurray, Alta. on Saturday, May 7, 2016. Police say a British Columbia man is facing charges for impersonating a Fort McMurray evacuee and allegedly taking advantage of people who were trying to help.THE CANADIAN PRESS/Jonathan Hayward

In a Tuesday morning update, provincial emergency officials said the Fort McMurray wildfire had grown to 523,000 hectares, almost the size of Prince Edward Island, and was still out of control but moving farther east and northeast away from the city and industrial operations.

A similar move to repopulate the projects a week ago was stymied when the fire suddenly changed direction to again threaten industry and force about 8,000 workers to flee work camps.

Syncrude Canada spokesman Will Gibson said Tuesday that his company has adopted a comprehensive evacuation plan in case that happens again.

We’re continuing to work on retrieval plan for vehicles left at site during evacuations and will provide an update later this week. #ymmfire

A reminder for employees to visit: https://t.co/QcOnEu77L6 for more information on return to work. #ymmfire

“We’re making significant progress on our safe return to operations plan and details of when we’ll resume production will be available at a later date,” he said.

Analysts estimate more than one million barrels per day of oilsands production – nearly half their capacity of 2.5 million bpd – were offline at times over the past three weeks as the wildfire forced staff evacuations and the precautionary shutdown of inbound and outbound pipelines. None of the projects has reported substantial damage.

Athabasca Oil said Tuesday that it has resumed operations at its Hangingstone project, which produces bitumen from wells using steam to melt the thick oil. It said the facility did not suffer any damage from wildfires that crept to within a few kilometres, forcing staff to scramble to safety three weeks ago.

Athabasca Oil says it's resumed operations at its Hangingstone #oilsands project. There was no fire damage. #ymmfire $ATH

Athabasca Oil has resumed operations at its Hangingstone #oilsands project after shutting down production of 9,000 bpd due to the #ymmfire

Prior to shutdown, the thermal project commissioned last year had ramped up to 9,000 barrels per day on the way to output capacity of 12,000 bpd. Athabasca said it expects its underground reservoir to recover to normal operating levels over the next several weeks.

Meanwhile, Suncor Energy (TSX:SU) continued to bring workers back to its oilsands mining and thermal projects north of Fort McMurray after emergency officials lifted evacuation orders on the weekend.

A CIBC (TSX:CM) report published Tuesday morning estimated the cash flow impact of lost Suncor production will be about $760 million, while cautioning that number could be reduced by insurance coverage.

“Assuming there is no additional fire risk, we estimate the downtime from the fire and ramp to turnaround capacity to be three to four weeks, with an additional week to get production back up to full capacity with the completion of the turnaround.”

Suncor’s mining operations have a capacity of about 250,000 barrels a day but had been reduced by about two-thirds by a maintenance turnaround in its upgrader when the fire broke out. That work will have to be completed before the upgrader output returns to normal.

Suncor’s Firebag and Mackay River thermal operations, which were also closed, have combined capacity of about 235,000 bpd.

Syncrude, owned by a consortium that includes Suncor, has capacity of 350,000 bpd at its upgrader and Mildred Lake and Aurora mines.

Spokesman Rob Evans of ConocoPhillips said workers began arriving at its Surmont thermal project site on Tuesday and the company expects to have 350 workers there by Friday.

The project was producing about 50,000 bpd before being shut down. Evans said its unclear when that level will be reached again.

Morrison: "It's still early in the fire season for us." There's always potential fire will turn back to oilsands facilities. #YMMFire

No "immediate" threat to #oilsands, but gotta get through this week. We hope to hold the fire re: oilsands facilities. #ymmfire

Long says oilsands workers won't get into city sooner than others. Oil companies supportive of that. #ymmfire #ymm #rmwb

May 23, 5:30 p.m.- A message from Bob Couture on smoke and hotspots in the #FortMcMurray area #ymmfire pic.twitter.com/ya5xVRuFOg