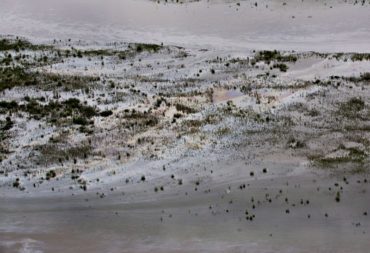 Judy Ferguson says in her annual report that as of the end of March, the Ministry of the Economy did not have written policies and procedures to evaluate existing pipeline operations.

She also says the ministry hasn’t developed a risk-based assessment to monitor pipeline construction or the integrity and safety of existing lines.

Ferguson notes that the government is inspecting pipelines that cross water in the wake of an oil spill on the shore of the North Saskatchewan River last July that jeopardized the drinking water of thousands of people.

“Those inspections were done as a result of the spill for Husky and we think that’s appropriate that they did do that,” she said.

“But they need a longer term approach to doing that as opposed to just an ad hoc look.”

A Husky Energy pipeline leak spilled 225,000 litres of heavy oil mixed with diluent onto the bank of the river near Maidstone.

About 40 per cent reached the river, where the plume flowed hundreds of kilometres downstream and forced the cities of North Battleford, Prince Albert and Melfort to shut their intakes from the river and find other water sources for almost two months.

There are about 2,200 licensed pipelines in Saskatchewan and approximately 80 operators. The companies are supposed to submit forms to show that they’re following operation standards.

The government plans to use the information to help monitor pipelines.

But Ferguson says the government is focusing on updating its licensing records and issuing amendments to pipeline licences, as opposed to using the information to monitor pipelines.

“They haven’t turned their mind to even assessing the results that are in the compliance reports that they have received and to come up with a strategy as to how they’re going to make sure that the pipelines in fact are safe,” she said.

Ferguson says the two largest operators – who account for about half of all pipelines in the province – have not completed all their forms.

Doug MacKnight, the assistant deputy minister of the economy, says companies are working hard to complete the forms.

“It’s just taking a lot longer than we had expected because of the complexity of the work,” said MacKnight.

MacKnight says the government is making strides when it comes to pipeline inspections and regulations by auditing pipeline operators to make sure that they’re following safe standards.

“So that’s actually looking at the way the companies operate to make sure that they are inspecting their lines regularly, they have good integrity management programs, they have good governance of their systems,” he said.

“And that really is the trend all regulators are pursuing.”

But Keith Stewart with Greenpeace Canada says he’s concerned that the government hasn’t acted faster given that the auditor made the recommendations five years ago.

“This is people’s drinking water we’re talking about. It’s crucial for wildlife. And Saskatchewan basically has one of the weakest or at least more disorganized pipeline safety regimes in the country,” said Stewart.

The report says: “Without plans, policies and targets, Saskatchewan may not be able to fulfil its commitment to Canada to contribute to the reduction of GHG emissions.”

“For that you actually have to get with the program and be part of the global climate solution,” he said.

Saskatchewan Environment Minister Scott Moe says the province has signed onto the Vancouver Declaration, a national agreement to reduce Canada’s emissions by 30 per cent from 2005 levels by 2030.

However, the auditor notes that the agreement does not hold Saskatchewan to the same target.

Moe says the province is working on reducing emissions, but he wouldn’t talk about a specific target.

“That’s work that’s going on right now with respect to what our targets will be here in the province of Saskatchewan,” he said.