DETROIT – A government effort to speed up recalls of more than 21 million of the most dangerous Takata air bag inflators is falling short, according to an analysis of completion rates by The Associated Press. 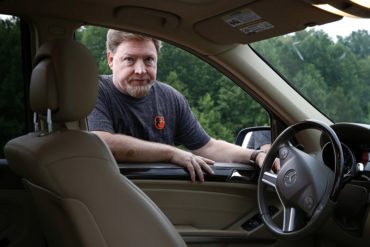 In this July 28, 2017, photo, John Carroll poses alongside his 2010 Mercedes-Benz ML 350 sport utility vehicle, which contains a driver’s side Takata air bag inflator that has been recalled, in Perry Hall, Md. Carroll is waiting for parts in order for his recalled inflator to be replaced. A government effort to speed up recalls of more than 21 million of the most dangerous Takata air bag inflators is falling short, according to an analysis of completion rates by The Associated Press. (AP Photo/Patrick Semansky)

Nearly 10 million inflators with the highest risk of rupturing remained in use as of March 31, the latest documents filed by 10 automakers with the National Highway Traffic Safety Administration show. That makes it likely that automakers won’t meet the government’s Dec. 31 deadline to finish the recalls, most of which began in mid-2015.

Defective Takata air bag inflators can hurl shrapnel at drivers and passengers involved in a crash. At least 18 deaths have been reported worldwide, including 12 in the U.S. Inflators with a greater risk of rupturing, deemed “Priority One” by NHTSA, are older, are of a type more prone to failing, or they’ve been in high humidity areas for many years. Just last week, Florida authorities were investigating whether an exploding inflator in an older Honda Accord killed a 34-year-old mother of three near Tampa.

Of NHTSA’s 15 highest-priority recalls, 10 had completion rates below 50 per cent on the latest quarterly reports from automakers. In one recall of Ford Ranger pickups, the completion percentage was only 1.1 per cent. In six recalls, fewer than one-third of the inflators had been replaced.

“The long and short of it is the recall is failing,” said U.S. Sen. Bill Nelson, D-Florida, a frequent NHTSA critic. Florida has more than 3 million recalled inflators with only about one-third replaced, according to Nelson’s office.

Overall, 46 million inflators have been recalled as of June 23. The government says automakers have replaced 16 million, about 40 per cent. But more recalls are coming, which will put a further strain on car companies, dealers and owners to get the repairs done.

NHTSA say it’s “deeply concerned” that some automakers have low completion rates. In a 2015 order, NHTSA threatened fines against automakers who don’t comply with deadlines. Asked if fines are possible, an agency spokeswoman said it is monitoring compliance “and will take further action as appropriate.”

Automakers say completion rates are improving and they’re co-operating with the government. Some say they’ve had trouble getting parts, and most have had difficulty finding owners and persuading them to get cars repaired. Subaru, Mitsubishi and Nissan did not respond to requests for comment.

Ford’s slow response in the January 2016 recall of driver-side inflators in Ford Ranger pickups means thousands of trucks with dangerous inflators are still being driven. A South Carolina man was killed by an inflator in December of 2015 when his Ranger crashed. Only 511 of the nearly 362,000 recalled Rangers from the 2004 through 2006 model years have been fixed, with another 3,500 owners unreachable or vehicles removed from use, according to Ford’s latest report. Ford had two other recalls from 2015 with completion rates under 40 per cent.

Spokeswoman Elizabeth Weigandt says Ford has been replacing Ranger inflators in high-risk areas with newer versions of the same inflators that are in the vehicles now, with the intent of swapping them for safer ones later, she says. Since the inflators deteriorate over time, newer ones are better.

“We are working with our suppliers to expedite final remedy parts for these vehicles and expect those to be available in early fourth quarter 2017,” she says, declining further comment.

Quarterly reports filed by BMW, Fiat Chrysler, Daimler Vans, Nissan, Mazda and Mitsubishi all showed completion rates under 50 per cent. Daimler hit only 8.4 per cent and BMW reached 28.6 per cent. Fiat Chrysler’s lone recall came in at 48 per cent, while one Toyota recall was above 50 per cent and another just below. Subaru hit 57 per cent. Due to a parts supplier problem, BMW got a five-month deadline extension.

Even Honda, which has replaced over 63 per cent of the inflators in its two “Priority One” recalls, has 3.3 million inflators left to fix.

In a letter to senators, NHTSA Acting Deputy Administrator Jack Danielson wrote that automakers have had enough time to get replacement parts.

Several vehicle owners say dealers are still turning them away for lack of parts. John Carroll of Bel Air, Maryland, near Baltimore, says he checks with his dealer often to see if an inflator has arrived for his 2010 Mercedes ML350 driver’s air bag.

“The answer is always the same. They don’t have the parts yet,” says Carroll.

To get over 60 per cent, Honda set up teams in major metro areas who visit owners’ homes. In some cases, Honda will send technicians to fix cars in driveways. The company also has used letters, social media and telephone calls to reach owners, spokesman Chris Martin says.

NHTSA has urged automakers to take steps similar to Honda, and it has hired a monitor to watch the automakers.