A recommendation to ask the Toronto Transit Commission to report on a plan for automated vehicle technology is on the agenda of a June 28 meeting of local politicians. 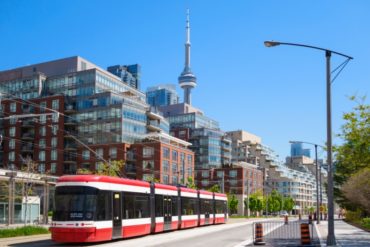 The executive committee – comprised of 13 of Toronto’s city councillors – is scheduled to discuss next Tuesday a motion for City Council to “request the Toronto Transit Commission to report to the Executive Committee by the fourth quarter of 2016 with respect to the Commission’s strategic plan concerning the incorporation of automated vehicle technology within the City’s transit system.”

That motion was moved by Michelle Holland (until recently known as Michelle Berardinetti), councillor for Ward 35 Scarborough Southwest, at the full council’s last meeting June 8. The motion was referred to the executive committee because a two-thirds vote was required to waive referral. Only 23 of the 40 councillors present June 8 voted in favour.

A summary posted to the city website refers to the WEpod, a driverless bus used near the Dutch city of Arnhem.

“From June 2016 onwards, these self-driving vans will travel between the Ede-Wageningen railway and bus station and Wageningen University & Research Centre,” states the Delft University of Technology on the website of its civil engineering and geoscience department. “Passengers will be able to book a ride using an app.”

The Delft University of Technology, based north of Rotterdam, is one of the partners in the WEpod project. Wageningen University is west of Arnhem.

“The six-person vans have a GPS on board that was developed by the Department of Geoscience & Remote Sensing as well as 3D imaging and a radar system developed by 3ME and other partners,” states TU Delft’s civil engineering and geoscience department. “These allow the vans to observe their surroundings and always stop for other road users. These systems are currently being calibrated in CEG’s garage. The Department of Transport & Planning at CEG is studying the safety aspects of the route the vans will travel and their integration into the transport system.”

In background information provided with Councillor Holland’s motion, the City of Toronto notes that the City of Beverly Hills, Calif. “is looking to incorporate automated buses to pick up passengers which will then connect them to new rapid transit lines in the area.”

Other cities “exploring the use of automated buses” include Lausanne, Switzerland, and Zhengzhou, China, the motion summary states, adding  “it is essential that with the current pace of technological change that the City of Toronto’s public transit system properly prepare for the use of these new technologies.”

“If you are an original equipment manufacturer, a research institution company that sells automated parts, you can participate in the pilot of testing vehicles on Ontario roads,” Purdy said Feb. 29, adding at the time that MTO hadn’t approved any applications.

The Ontario government does not “intend to permit driverless cars right off the bat,” said Jessica Mahon, MTO team leader, special projects, on Aug. 31, 2015 at the Insurance-Canada.ca Executive Forum in Toronto. “We will require that a driver be in the driver’s seat, ready to intervene at any time should something fail.”