The first autonomous cars will debut in 2020, with the total number of new registrations forecasted to grow at a compound annual growth rate (CAGR) of 62% from 0.2 million units in 2020 to reach 24 million units in 2030, according to Swedish market research firm Berg Insight. 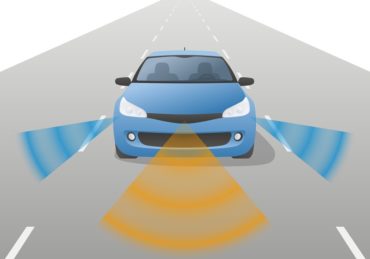 In addition to the 62% CAGR growth, Berg Insight said in the report that “the active installed base of autonomous cars is forecasted to have reached about 71 million at the end of 2030.”

“It is important to note that autonomous cars are not a single innovation; rather this technology can be seen as a continuum of various levels of autonomy where the amount of driver involvement is the main differentiating factor,” Berg Insight said in a press release. “Furthermore, several sophisticated technologies must come together to enable a car to safely drive by itself and autonomous cars will therefore roll out in incremental phases. In particular, software for interpreting sensor information and managing the driving logic is key to the development of self-driving cars.” 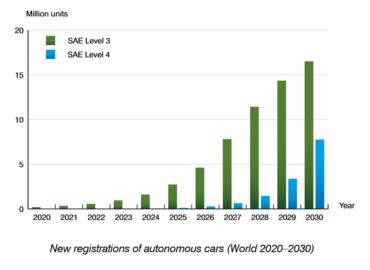 The report noted that several automobile manufacturers have already initiated projects to develop self-driving features in their cars. The incumbent automakers are joined by multiple new actors, such as IT companies and other technology-oriented firms, the release added. Most incumbent automotive companies pursue an incremental approach with step-by-step roll-out of autonomous systems, while startups and IT companies take a more revolutionary direction and aim at developing fully autonomous cars immediately from scratch, Berg Insight suggested.

“These pathways do not contradict each other as different autonomous systems are suitable in different use cases,” said Ludvig Barrehag, M2M/IoT analyst at Berg Insight, in the release. “We will continue to see development from both sides for still some years before the two approaches converge.”

The market research firm concluded that the advent of autonomous cars is expected to have a “tremendous impact on our society in several ways.” Cars are among the most costly but inefficiently used assets of today. “When cars can operate around the clock on a service based business model, it results in a tremendous increase of their utilization rate,” the company said in the release. “Furthermore, autonomous cars will improve life quality for people unable to drive, reduce the number of fatalities and accidents in road traffic and increase overall traffic efficiency. The economic benefits are vast – the challenge is to succeed in making self-driving cars sufficiently reliable at a reasonable cost to enable commercialization.”

More News
Related
Telematics subscribers using embedded systems to reach 170 million worldwide by 2021, from 26.5 million at the end of 2015: report
North America world’s most advanced smart home market: Berg Insight
Internet of Things spending to reach US$1.29 trillion by 2020, insurance industry to see fast spending growth: report
Global insurance telematics market expected to grow to US$2.21 billion in 2020 from US$857.2 million in 2015