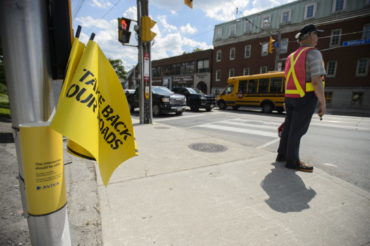 Aviva Canada kicked off a new road safety initiative, although things got off to a rocky start in Toronto.

The Take Back Our Roads campaign launched this week as a way to improve road safety on streets across Canada, said Catherine Brown, vice president of marketing and corporate social responsibility at Aviva. The project is specifically designed to go beyond looking at changing behaviours. Instead, it examines factors related to infrastructure and engineering that put drivers, cyclists and pedestrians at risk when using roads.

The campaign is data-driven. Aviva will be working with municipalities and other companies to collect information on what might be causing 156,000 injuries or fatalities on Canadian roads.

“What we’re attempting to do is identify the biggest issues through our data and take a look at alternate solutions to built environments to make the roads safer,” Brown said.

For example, she explained, the initiative will look at pedestrian signals to determine if enough time is being given for people to cross; if turn signals are long enough for vehicles; or if visibility issues at intersections prevent road users from seeing each other properly.

From there, Aviva plans to work with non-profits, municipalities, provincial police and the like to see what changes can be made. “It’s not necessarily asking the driver to take on the onus of behavioural change. It’s actually changing how we drive on the roads and how we interact with the built environment to make them safer,” Brown said.

The company felt this was an unexplored area. “We have the data, we have the resources available to us, and we’ve identified that this is an issue,” Brown said. “So we felt like there was space here and we had an opportunity to make some long-term, lasting change on our roads.”

The insurer quietly kicked off its Take Back Our Roads initiative by installing flags at nine Toronto intersections deemed risky based on its data. The idea was for pedestrians to carry the flags as they cross streets to make themselves more visible to drivers. But that part of the initiative didn’t go according to plan, with the city saying that Aviva didn’t follow due process.

“We support Aviva Canada’s efforts in enhancing road safety in Toronto, but permission was not sought from the City of Toronto before affixing flags to city-owned poles at crosswalk intersections,” City of Toronto spokesman Brad Ross told Canadian Underwriter in an email. “Any organization that wishes to share proposals with the city to improve the liveability of residents and visitors must do so through due process.”

Ross said the company was asked to remove the flag installations shortly after they were put up about a week ago. Aviva confirmed they were all taken down by the evening before the program was launched.

Brown chalked it up to miscommunication. She noted that the company has been working with the city on its Vision Zero Road Safety Plan to reduce the number of traffic-related deaths and injuries to zero. Ross added that the city is happy to welcome companies and organizations with ideas to complement its plan.