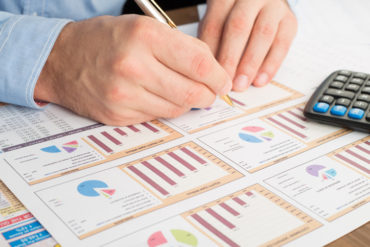 By segment, the Insurance segment reported gross premiums written (GPW) of US$607 million in Q4 2016, a decrease of 1% from US$613 million of GPW in the corresponding quarter of 2015. After adjusting for the impact of foreign exchange movements, the growth was attributable to increases in liability, property, and professional lines driven by new business, AXIS Capital said in the release, adding that these increases were partially offset by decreases in credit and political risk, as well as accident and health lines.

For the full year 2016, the Insurance segment reported GPW of US$2.7 billion, an increase of 5% from US$2.6 billion of GPW in 2015. After adjusting for the impact of foreign exchange movements, the growth was attributable to increases in accident and health, property, liability and professional lines, primarily driven by new business. These increases were partially offset by the impact of the exit from retail insurance operations in Australia last year as well as a decrease in premiums written in marine lines. The decrease in marine lines was driven by reduced business opportunities, lower rates, and timing differences, AXIS Capital said in the release.

Insurance segment net premiums written (NPW) decreased by 8% in Q4 2016, compared to the same period in 2015, reflecting lower GPW in the quarter and increased premiums ceded in the company’s professional and liability lines. For the full year 2016, NPW increased by 3% compared to 2015, driven by growth in premiums written, partially offset by an increase in premiums ceded in professional and liability lines.

Regarding the company’s Reinsurance segment for the fourth quarter of 2016, GPW decreased 34% to US$123 million from US$187 million in the corresponding quarter of 2015. The decrease was impacted by a lower level of premiums written on a multi-year basis during 2016 compared to 2015, most notably in liability lines. The decrease was driven by professional lines of business, partially offset by an increase in agriculture lines. “The decrease in our professional lines related to the restructuring of a large quota share treaty which impacted the timing of premium recognition,” the release said. “The increase in our agriculture lines was driven by the impact of favourable premium adjustments.” 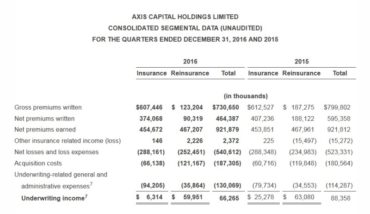 For the full year 2016, the Reinsurance segment reported GPW of US$2.2 billion, an increase of 11% from US$2 billion of GPW in 2015. The increase was impacted by a higher level of premiums written on a multi-year basis during 2016, compared to 2015, most notably in credit and surety as well as liability lines. Partially offsetting this increase was the impact of foreign exchange movements, as the strengthening of the U.S. dollar drove comparative premium decreases in treaties denominated in foreign currencies. The growth was attributable to increases in liability, marine and other, catastrophe, agriculture, motor, and credit and surety lines, primarily driven by new business. Timing differences in liability lines, a favourable treaty restructuring together with increased line sizes in our agriculture lines and favourable premium adjustments in credit and surety lines also contributed to the increase in GPW in 2016, AXIS Capital said. These increases were partially offset by a decrease in property lines, primarily relating to non-renewals, decreases in line sizes on several treaties, and the restructuring of a large treaty.

Reinsurance NPW decreased by 52% in the fourth quarter of 2016, compared to the same period in 2015, reflecting the decrease in GPW in the quarter and the impact of a retrocessional cover entered into with Harrington Re Ltd. in Q3 2016, which increased premiums ceded in liability and professional lines. For the full year 2016, NPW increased by 2% compared to 2015, reflecting the increase in GPW, partially offset by the impact of the retrocessional cover with Harrington Re Ltd. as well as an increase in premiums ceded in catastrophe and property lines.

Commenting on the financial results, Albert Benchimol, president and CEO of AXIS Capital, said in the release that “the strength of our operating results in the fourth quarter – which included Hurricane Matthew and other U.S. weather-related events, and 11% growth in our full-year operating earnings per share despite continued market pressure and elevated global cat losses – demonstrates the progression of our initiatives to deliver a more stable and growing earnings profile.”

He added that the core operating performance strengthened in both the quarter and full year, “as the improvements we have put in place allowed us to absorb higher industry cat losses and to navigate negative market conditions while still delivering for our customers, our partners in distribution, and our shareholders. These encouraging financial results were delivered in a year when we made significant advances in our franchise including expanding our presence and reach into Dubai, Continental Europe and the Latin American markets; further diversifying our portfolio by introducing new products and recruiting new teams; and growing our strategic capital partnerships highlighted by the launch of Harrington Re. We are confident that our progress will continue in 2017.”